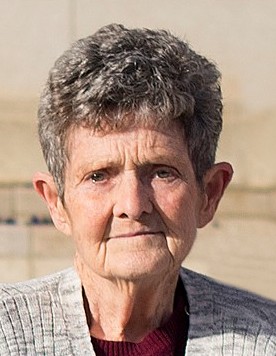 Ada Renee Woodruff, loving wife, mother, grandmother, great grandmother, sister, and friend passed away on January 22, 2022 at the age of 81 surrounded by family.

Renee was born December 8th, 1940 in Brigham City, Utah.  She was the 2nd of 7 children to Darrel Bronson Shaw and Josephine Phyllis Murphy Shaw.

She attended Bear River High School. She was in the band, played the clarinet and was the flag girl. She married Dale M. Woodruff on March 19, 1958 for time and all eternity in the Logan LDS Temple. Together they had five children.

After they were married, Dale and Renee moved to Seattle for 2 years for work.  They returned to Tremonton and lived in Sandalwood for 20 years and then built a home on the farm in East Tremonton.

Renee was a very hard worker.  She started her first job waitressing at age 13.  She had several jobs over her life. She worked at a couple of different cabinet shops sanding, staining and building cabinets and furniture. She was the first women to work on insulating the space shuttle rocket boosters at Thiokol.  She worked on the Woodruff farm planting, picking, selling tomatoes, corn and other produce.

She was a faithful member of The Church of Jesus Christ of Latter-day Saints.  She served in different callings including girl’s camp director.  With her husband she served in the Brigham City Temple.

Renee was active in sports and coached her sons little league baseball teams.  She played softball for the Women’s Tremonton City League for many years.

Renee loved to quilt, cook and have family over.  Everyone loved her homemade cinnamon rolls.  She loved to go camping, hunting, fishing…just anywhere her family was going. She liked to support her grandkids at any activity they were involved in.  She loved Pepsi and going with friends to drink Pepsi. Her house was the place to be and she welcomed anyone who showed up.

Renee is preceded in death by her parents, her brother (John Shaw), brother-in-law (Roger Brown) and one grandson, Zachary Daniel Woodruff.