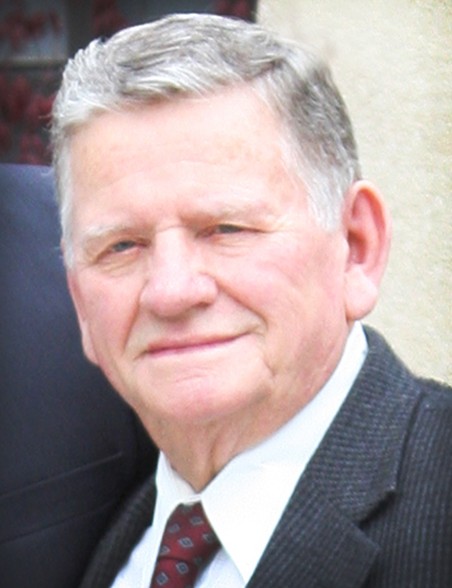 Andy grew up in Uintah and Stone Idaho. He graduated from Bear River High School and attended Weber State Academy. He married his high school sweetheart, Darlene Steed, on September 10, 1951 in the Logan Temple. Shortly after their marriage, he was drafted into the army and served in Germany during the Korean War.

Upon his return, he and Darlene lived in Benson, Tremonton and finally settled in Garland where they raised their family of four children. They loved their community deeply, and carried that feeling with them throughout their lives.

Andy worked as a contractor for many years, and also excelled as an insurance agent.  When he retired from the construction industry, he and Darlene enjoyed working together in his woodshop, where they spent many hours cutting custom wood orders for crafters from near and far. He also felt that service was an important part of life and spent many volunteer hours with scouts. He was elected mayor of Garland, and loved serving in that position for 12 years.

Andy had a passion for fishing. He enjoyed several fishing trips to Alaska and other locations, and passed the passion on to many of his kids and grandkids. His love of fishing continued even during his time at the GW Veteran’s Home. Whenever he got the chance, he would go on their fishing adventures, and relive the days of trips to his favorite lakes.

Andy and Darlene had 41 wonderful years together. You could often see them sitting in their front yard as they watched family members and neighborhood kids jump out of the tree on the rope swing. Darlene died on May 2, 1992, but was always in Dad’s heart.

Andy was active in The Church of Jesus Christ of Latter Day Saints. He loved the gospel and found joy in serving in many callings. He served as a Bishop, Bishop’s counselor, High Councilman, and loved working with the Young Men and in the Mutual/Young Men’s Organization. Some of his favorite times were spent as a temple worker in the Logan Temple.

He was preceded in death by his wife, parents, brother, Bryant, infant sister, Lenor and grandson, Eric Thomas Funk.

Interment will be in the Garland Cemetery.

The family would like to thank the wonderful staff at the George Wahlen Veteran’s Home and Bristol Hospice for caring for our dad with such kindness and love. We appreciate all of the friends and ward members that stopped in to visit him regularly during his years there.