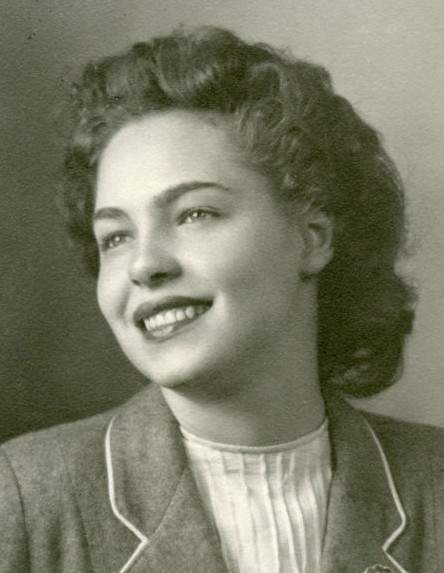 Audrey Devon Johnson returned home Friday, June 23, 2017.  She was born on April 2, 1927 to Harley and Rosalie Confer in American Falls, ID. Growing up in Salt Lake City, Audrey was a skilled roller skater and performed at the Salt Air Pavilion on the shores of the Great Salt Lake.  She graduated from West High School in Salt Lake City and was the very first employee for Lynn Wilson Foods.

After moving to Garland, UT, Audrey was crowned the Wheat and Beet Day Queen in 1947.  She married Paul Johnson from Bear River City on May 1, 1948. They made their home in Garland.  She worked at JCPenney and King's department stores in Tremonton as their store front window designer.

Paul and Audrey moved to Montello, NV where Audrey remodeled and rented out several homes.  She was a professional oil painter and her paintings have been viewed at many locations in the county throughout the years.

Upon returning to Garland, Paul and Audrey established a store and gas station in Tremonton where they made Shamrock Sandwiches. When Paul passed away in 1981, the name was changed to Audrey's Sandwiches and eventually spanned a delivery area of 6 states with a production of 1.2 million sandwiches a year.  They also delivered to the LDS conference and distribution centers for 4 years.

Audrey was baptized a member of the Church of Jesus Christ of Latter-day Saints and was active in the Garland 1st ward Relief Society for many years.

She was preceded in death by her husband Paul, her daughter Tamera Ann and her great-grandson Jaxon Devin Lewis.

A special thanks goes out to her neighbors, Sharyl Thompson and Adin Riehle, who helped maintain her health, safety and happiness over the years.

Funeral services will be held Friday, June 30, 2017 at 11:00 am at Rogers and Taylor Funeral Home, 111 North 1st East, Tremonton, UT.  Family and friends may attend a viewing Thursday evening from 6-8 at the mortuary and Friday 9:30-10:30 am.  Interment to follow at the Garland City Cemetery.