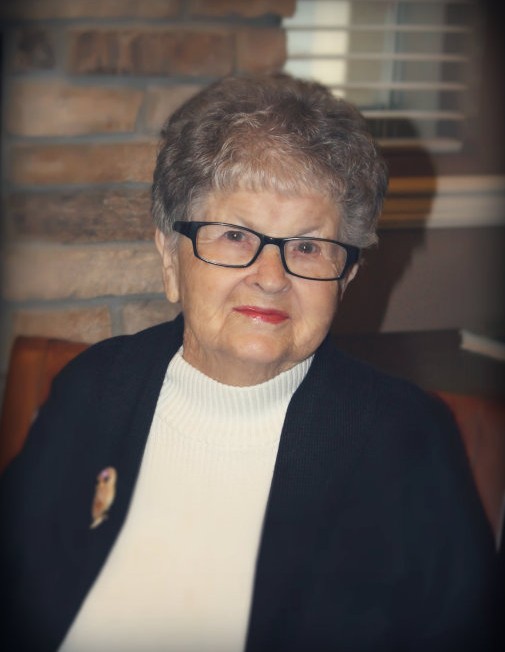 Beth Rhodes Wood 100 was called home by her Heavenly Father on Saturday April 15,2017 while living at Deer Trail Assisted Living in Rock Springs Wyoming. With family members by her side.  She had been a Rock Springs resident for the past two years and a former long time resident of Cheyenne Wyoming.

Beth was born on March 8, 1917 in East Garland Utah. The eighth child of 15 born to William Jasper “Jap” Rhodes and Ellen Capener Rhodes. She was raised on the family farm in East Garland.  She attended grade school in East Garland and high school at Bear River High in Garland.

She married Clyde Quincy Wood on September 11, 1935 at the Logan Utah LDS temple.  Together they raised four children, LaRae, Hal, Alan and Sandra.  Just after marriage Beth and Clyde ran a gas station with an adjoining Hamburger Stand across the street from the Garland Sugar Factory.   Along the way they spent years working on a turkey farm, which could explain why she wouldn’t eat turkey right to the end of her life.  The couple moved to Salt Lake City and began a long career in the drug store business.  They ran drug stores in Salt Lake and Provo Utah, Pocatello Idaho, Billings Montana and eventually Cheyenne Wyoming where they called home for most of their life.  Beth worked as a cosmetologist, and a clerk at the drug store for many years.  She also worked with the Cheyenne Welcome Wagon and was the Keebler Cookie lady for a few years.  Beth enjoyed playing golf, Saturday Night Dance Club, gambling mostly in Jackpot Nevada with their Utah family, gardening her beautiful roses and the many family games of Tripoly and Spite and Malace.

She was a member of the Church of Jesus Christ of Latter Day Saints.  She also was a member of The Town and Country League in Cheyenne and along with Clyde they were members of the Saturday Night Dance Club.

A Viewing will be held on Monday April 24, 2017 from 11:00 until Noon at Rudd Funeral Home 1234 S. Main Garland, Utah with a graveside service to follow at the Garland Cemetery.

In Lieu of flowers the family request that donations be made to Hospice of Sweetwater County 333 Broadway Rock Springs, WY  82901 or Deer Trail Assisted Living 2360 Reagan Ave. Rock Springs, WY 82901, or the charity of your choice.