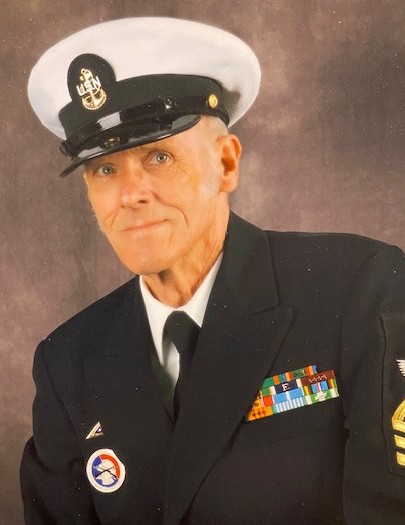 Dad grew up running the streets of Brigham City, Utah with his identical twin Bobby, his older brother Dallas and sister Jackie. He attended schools in Box Elder until May of 1954 at the age of 17 he followed his brothers into the United States Navy. He served on the USS Constellation CV64 as an Aviation Boatswain Fuels Chief Petty Officer.  He was proud of his service in the Navy and had many stories of his time on the aircraft carriers. He loved anything and everything Navy.  He retired as Chief E7 after 20 years of service in November 1973.

Dad returned home to Utah and began a job at Thiokol March 4, 1974 where he worked as a Millwright Weight Tester for almost 30 years until his medical retirement in July, 2001. There he met Joanie Seager Peterson. They married May 3, 1980 and made their home in Elwood, Utah for 40 years.

Dad loved camping and fishing. You could always find him down by the water with the grandkids trying to teach them how to bait their hooks. He spent so much time with the grandkids poles I don’t know how he ever caught any fish, but he was always the happiest when they caught fish. He loved having family around while camping.  Dad enjoyed reading and listening to old time country music.

Dad was a certified Locksmith. He would tell us stories of people he helped unlock their cars late at night, and he just couldn’t charge them for his time. He enjoyed helping people and sometimes getting paid. He did that for many years until his health made it too difficult.

When dad and Joanie got married, they combined two families and those families have grown so much over the last 40 years.

Dad recently lost his wife of 40 years, Joanie. He was so lost and lonely without her. I know he had a happy reunion with those that preceded him. His parent’s, stepdad, Edward Voege; brothers, Bobby & Dallas Jensen; sister Jackie Malmrose; son, Robert Jensen; grandsons, Austin Nieffenegger and Skyler Ensminger; granddaughter, Alison Gibbs; nephew, Gary Malmrose and many others that welcomed him home.

All services will be held at Rogers and Taylor Funeral Home (111 North 100 East Tremonton). Viewings will be held on Monday July 5, 2021 from 6-8pm and on Tuesday July 6, 2021 from 9:30-10:30am with the funeral to follow at 11am. Online condolences may be found at www.ruddfuneralhome.com under his obituary.