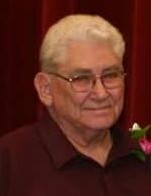 Bryan Thomas Larsen, 77, of Tremonton, passed away peacefully surrounded by his loving family on March 21, 2016 in Salt Lake City. He was born on Sept. 18, 1938 to Elmer E Larsen and Phyllis June Larsen in Preston, Idaho.
He married his eternal sweetheart Emma Jean Barrus Larsen on February 24, 1961. She was the love of his life and light of his eyes for 55 years. Their marriage was solemnized on February 23, 1962.
He graduated from Bear River High School. He was a veteran of the USAF where he served in Japan. He worked as an aircraft mechanic at Hill Air Force Base where he worked on the F-4 Phantom Jet. He served with his family as custodian of the Tremonton Stake Center, and retired from the DCMA Thiokol as Quality Assurance Specialist in 2004.
Bryan was a valiant member of The Church of Jesus Christ of Latter-day Saints and worked in various callings including serving in the bishopric, a loyal home teacher, and a scout leader alongside his sons.
He was an avid sports fan and coach. He also enjoyed watching his children and grandchildren play sports. He was a fan of Bear River High School Sports, Utah State Aggies, BYU Cougars, and enjoyed watching the Utah Jazz with his wife.
He is survived by his sweetheart and their children, Bryan Curtis (Sonia) Larsen of Logan; Larry Larsen of Tremonton; Vera Jean (Stephan) Thomas of Deweyville; LaDawn (Eli) Burnum of Syracuse, Gerald Larsen, Emily (Dennis) Cutler, Michael (Angie) Larsen, and Tricia (Daniel) Nelson all of Tremonton. His 34 grandchildren and 15 great grandchildren who were the joy of his life.
He is also survived by his siblings Marion Boyington, Paul Larsen, Gail Bishop, Karen Burnett, Reid Larsen, Brad Larsen, and Chris Larsen.
He is preceded in death by his parents, an infant brother Gerald Thomas Larsen, sister Janice Clare and his in-laws Winford and Orlean Barrus.
The family would like to give special thanks to Dr. Chad Merrell, Dr. Rod Merrell, Dr. Todd Miller, the ER Staff at Bear River Hospital, the caring compassionate service of the Tremonton Fire & EMS Department, McKay Dee Hospital ICU and Promise Hospital of Salt Lake.