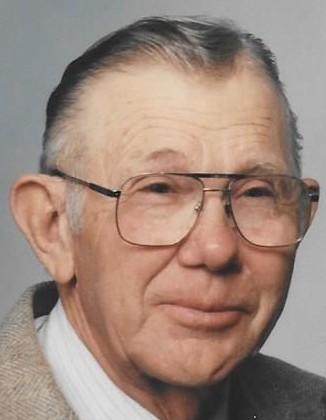 Rigby, Idaho – Carl Milton Stenquist, 93, died early Saturday, May 26, 2018, at the home of his daughter, Carma, in Rigby, Idaho of causes incident to age.

He was born April 18, 1925 in Bear River, Utah, the son of William Leander Stenquist and Dorothea Johanna Borg Stenquist, the second of seven children.  He attended McKinley Elementary and Bear River High School.  He joined the Army Air Corp (now the US Air Force) in 1943 and was stationed in Guam during World War II.  He married Carol Lorraine Lott on September 30, 1947 in the Logan LDS Temple.

Shortly after returning home from the war and early in his marriage, he and Carol lived in eastern Idaho while farming for Floyd Stohl in Clementsville and Lamont, then Lloyd Mickelsen in Idaho Falls, before venturing out on his own in Coltman.  It was during this time they had their first two sons, Stephen and Gale.

In 1952, they returned to Tremonton where he worked with his father and eventually took over the family farm.  He loved his family and farming – and the two were entwined. He and Carol added three daughters, LeAnn, Marlene, and Carma and another son, Brian.  Their son, Stephen, died from cancer in 1958.

He was a faithful member of the LDS Church – always active whether at home or during war.  He loved the Lord and was a powerful example to his children and grandchildren.  Kindness was an attribute he exhibited throughout his life.

In 1996 he and Carol moved to Riverdale to the home of his daughter Marlene.  His beloved wife Carol passed away on December 28, 1999.  He moved to Rigby three years ago to live with Carma.

He was preceded in death by his parents, wife Carol, son Stephen, and brothers Lee, Bill, Larry, and Gary.

We want to extend a special thank you to Aspen Home Health & Hospice – especially Chris, Becca, Adriana, and Shelley – for their kindness and care over the past five months.  Thank you also to the staff at Good Samaritan Care Center.

Funeral services will be held Saturday, June 2, 2018, at 1:00 p.m. at the Tremonton Third Ward, 9590 North 6800 West, Tremonton, UT, with visitation from 11:30-12:30 prior to the service at the church. Interment in the Tremonton Riverview Cemetery. Online condolences may be shared with the family at www.ruddfuneralhome.com