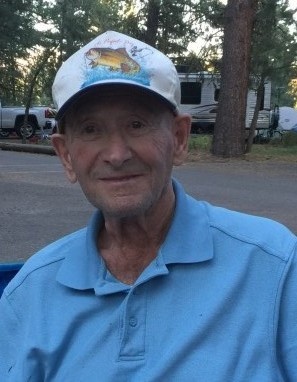 Darwin Hansen, 88, of Kuna Idaho, passed away peacefully at home Friday, December 15, 2017. He was born April 19, 1929, in Elwood, Utah to Joseph and Daisy E. Hansen. He was raised on a small farm in Elwood, Utah. He attended Bear River High before serving a mission for the LDS church in Western Canada. He then served as a Corporal in the U.S. Army during the Korean Conflict then stationed for a short time after in Japan. Darwin returned home and eventually met Joyce K. Reno in Mackey Idaho in 1959. They were sealed in the Idaho Falls Idaho Temple on October 16, 1959. Darwin had various jobs around Idaho that took him from Ranch Hand to Dairy Herdsman. He retired from Triangle Dairy after 23 years with the company. During retirement, Darwin spent time living with some of his children and grandchildren who he loved deeply. Darwin is survived by his siblings, Joyce (Howard) Stokes and Bonnie (Ross) Rudd, and his four children, Mariann (Kenyon) Millet, Kevin Hansen, Korey (Tara) Hansen, and Melissa Navarro, 18 grandchildren and 19 great-grandchildren. Darwin was preceded in death by his brother Vern (Anne) Hansen and Dale (Sylvia) Hansen. We want to thank Treasure Valley Hospice Nurses Carrie Tiffany and C.N.A. Chris for helping our family and father in our time of need.  Funeral services will be held on Wednesday, December 20, 2017, at Rogers & Taylor Funeral Home (111 N 100 E Tremonton, Utah). A viewing will begin at 10:00 AM and the funeral will follow at 11:00 AM.