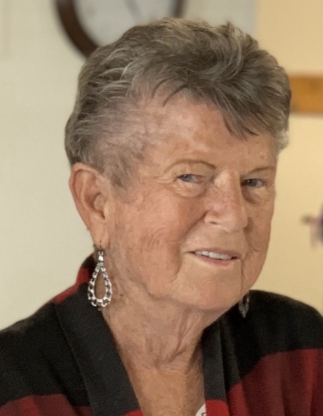 Delila “Tote” Watt Thatcher, 84, passed away on October 31st 2020 while surrounded by her daughters. Tote was born on September 7th 1936 in Thatcher, Utah to Cora Elizabeth Ray and William Louder Watt. She was the eleventh of a combined family of fifteen children. She attended school in Thatcher but left early to help care for her family. She met her sweetheart, Larry Thatcher, at a church dance, and they were married soon after on September 24th 1955 in Ely, Nevada. They were later sealed in the Logan, Utah LDS temple on September 24th 1963.

Together, Larry and Tote built Thatcher Masonry. Larry was the primary bricklayer and designer while Tote managed the “office.” They were a great team. In addition to supporting the family business, she raised three daughters—Sharla, Karla, and Jalyn. She also tended to her orchards and spent countless hours with her six grandchildren. Tote and Larry loved spending their summers in Malad, Idaho, working on the landscape and 4-wheeling. She adored her 13 greatgrandchildren. As matriarch of the family, she showed her love by cooking, hosting sleepovers and family parties, and being a second mother to many of her grandchildren. Her famous biscuits and gravy will forever be a mainstay of the Thatcher family food history.

Throughout the years, Tote served in many positions in the LDS church. Prior to Larry’s passing, she was part of the compassionate service group for over a decade.

The family would like to thank Bonnie and Christy of Intermountain Hospice for their help during Tote’s final days.

A family viewing will be held followed by a graveside service and interment at Penrose Cemetery.