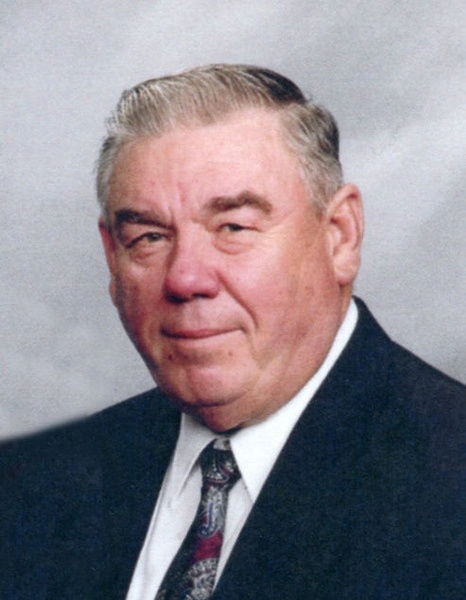 Dennis H. Udy- May 19, 1936-March 16, 2018.  Dennis passed away peacefully Friday morning with his family by his side.  He was born in Plymouth, Utah to Gardner L and Violetta Jane Udy.  He was born the fourth of five children.  He grew up in Plymouth where he attended Plymouth Elementary School and graduated from Bear River High School.

He served an LDS mission to the Texas Spanish American Mission.  Upon returning home, he became smitten with Joan Nish. They were engaged in December and married June 3, 1960 in the Logan LDS Temple.  They made their home in Plymouth where they welcomed their 7 children.  Vonna Brown of American Fork, Diana Udy of Plymouth, Reese (Eileen) Udy of West Fielding, (Kevin) Loi Ann Glenn of Young Ward, Burke (Corinne) Udy of Plymouth, Wesley (Mona) Udy of Plymouth and (Mike) Sarianne McNeil of Aurora, Colorado.

Dennis was an active member of the Church of Jesus Christ of Latter Day Saints where he held many callings including Young Men’s, Sunday School, Bishop and High Councilman. Dad worked at U & I Sugar until its closing and was then employed with Nucor Steel working along side his brother Bryce, until his retirement.

After 30 years of marriage, Joan passed away in August 1990.  He married Margaret Ann Hawkes Jeppesen on January 11, 1991, in the Logan LDS Temple.  They were called to serve in the Riverside California Mission, then served together in the Logan Temple for 10 years.

Dad enjoyed his hobby of horses.  He had a set of work horses that he was pretty proud of.  He loved being involved in the cutter races and flat track racing.  He served as Mayor of Plymouth after his father in law Orvil Nish wrote his name in on the ballot.  Dad enjoyed helping the families in Plymouth and being involved with the Fourth of July events and Rodeo.

He is survived by his wife of 27 years, Margaret, his seven children, four step children; (Tom) Jerilyn Call, (Daniel) Melanie Lawrence, Brian (Susan) Jeppesen, Scott (Jennifer) Jeppesen and Sarah Jeppesen.  He had 25 grand-children, 23 step grand-children, 14 great grand-children, and 18 step great grand-children. He has one brother Bryce (LaRita) Udy and one sister in law Ellerene Udy.   He was preceded in death by his wife, Joan, his parents, in laws Orvil and Retta LaVon Nish, brothers Ray and Odell Udy, sister and brother in law Max and Phyllis Kunzler and step son, Greg Jeppesen.

The family would like to thank the nursing staff at Symbii and Willow Glen Nursing Home for taking such good care of Dad.  In lieu of flowers, the family has asked you donate to your ward Missionary Fund or charity of your choice.

Viewing will be Thursday, March 22, from 6-8 PM at the Rogers & Taylor Funeral Home (111 N. 100 E. Tremonton, Utah) and a viewing will be Friday before the funeral from 10-11:30 AM at the Belmont Ward building in West Fielding (16925 N. 5200 W.).  The funeral will be at noon, conducted by Bishop Roland Christensen.  Burial services will be at the Plymouth Cemetery.