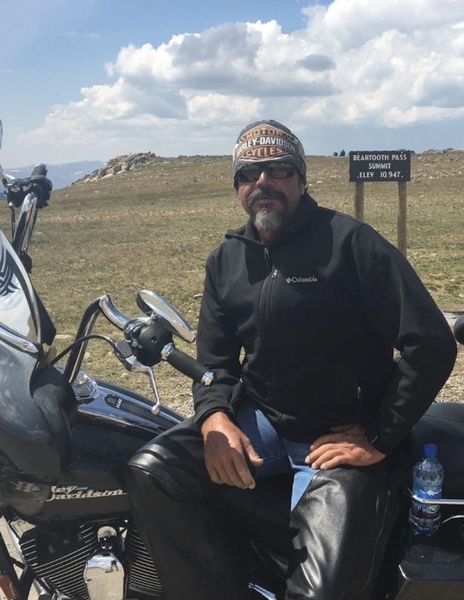 Derek was born on March 6th, 1966, to Delbert Olsen and Loni Sehrgosha. He graduated from Bear River High School in 1984, where he excelled on the swim team.

He went on to marry Terrilyn Morgan, and had his first child, Lindsay. In his early years he lived in Snowville Utah and worked numerous jobs such as OSI, construction at Black Pine Mine, and the Snowville Fire Department, where he passionately and proudly served as the Fire Chief.

Amidst expanding his family to three more children, Colby, Makena, and Oakley, he relocated to Tremonton Utah. Derek started working as a carpenter at Cleary Building, worked at Malt-O-Meal, and purchased his home in Garland Utah.

In 2011 they divorced, and later he married Nanette Stegen, and gained four bonus-children Chace, Austin, Shane, and Shania. His life advanced into Ogden Utah where he pursued his passions in Harley-Davidson motorcycles, camping in Morgan with friends and family, and construction, where he worked alongside his youngest son Oakley at Ormond Construction. He enjoyed riding his Harley, being a friend to any and all, providing fatherly advice, and spending as much time teasing his grandchildren as he could.

Derek is preceded in death by his mother Loni Sehrgosha, his brothers Adam Olsen, and Victor Olsen, his brother-in-law John Walling.

The family would like to extend a special thanks to the Box Elder County Fire Department, Ogden City Police Department, Weber County Sheriff’s Department, and friends and family for all of their love and support.

During the funeral services, we will be setting aside time for friends or family who would like to share a memory or story.

If you would like to donate to Derek’s funeral fund, you can do so via Venmo to Colby Olsen (@Colby-Olsen).