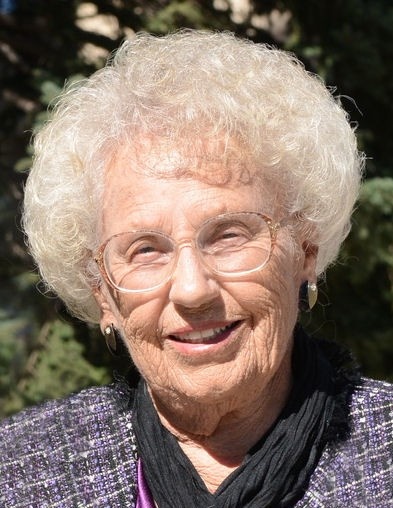 Doris Hadfield Roche left us on December 4, 2017, to be with her “Doug” that has waited to see her for over 20 years.

Doris was born on June 3, 1928 in Riverside, Utah to Job & Mabel Smith Hadfield. From the time she could walk she was riding horses and dancing. All her dad had to do to babysit her, was just turn on the radio and she would dance all day.

In Riverside, she had many friends called the “Black Sheep”. If one went somewhere, they all did including any event, even dates!

Doris attended Bear River High School where she was very active in many clubs including editor of the yearbook and Valedictorian.

Doris was an expert horseman. She was queen at numerous rodeos and a champion barrel racer. She rode show horses to pay for her college tuition. She attended USU with her dear friend and roommate Winona Gardner.

In 1948 she married the most handsome guy on the planet, her “Doug”. In her eyes he was the best thing that ever happened to her. A few years after their marriage they moved to the ranch, her second love. On the J6 Ranch they raised their four kids VerNon, LaMar, Jeff, and Lola along with hundreds of cattle and bushels of grain.

Doris cooked for hired men, gathered cows, along with returning to college and teaching dance. Doris taught thousands of kids dance and school for over 25 years. Doris choreographed many dance festivals, dance reviews, and musicals. She loved to play the piano and could play by ear. If you could sing it she could play it. She played for school and community productions and was in an orchestra.

Doris had a strong testimony of the gospel of Jesus Christ which showed in everything she did. She was a scout leader, Relief Society president, along with many other callings. Doris and Doug were temple workers for many years, leaving the house at 4:00 A.M. She treasured those days and had so many fond memories.

Doris had many talents from cross stitch and embroidering Christmas socks to babysitting any wild animal her kids decided to catch. She made elaborate Christmas socks for each grandchild which they all treasure.

She was preceded in death by her parents Job and Mabel Hadfield; husband Douglas; sister Arlene Reveal; and brother Ross Hadfield.

The Family would like to thank all the many friends and family that helped Doris and the great staff at Our House and Cache Valley Assisted Living. A special thank you to Buffy, Stephanie, and Jordan Heiner who are considered family for all their love and service.

Interment will be held at the Riverside Cemetery.