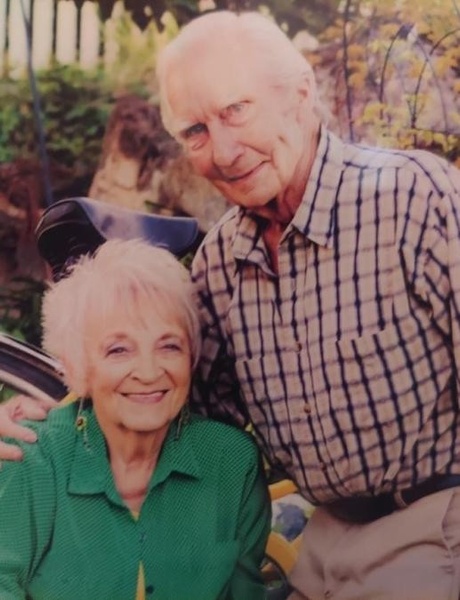 After being with Mom for 69 years, dad softly kissed her on the cheek before leaving her to get everything ready for when they can be together once again.

On October 18th dad slipped away peacefully leaving mom cuddled up by his side.

Douglas Parley Allred was born on February 20th in 1933 in Bear River City, Utah.  He was the second son of Orson Gilbert Allred (Gib) and Mildred Minson.  Doug was preceded in death by both his parents, older brother DeVon and younger brother, Jay David. De Vons wife Eva still in Garland and his sister Suzanne Lewis (Terry) reside in Florida.

Doug graduated from Bear River High School where he played on the basketball team.  Douglas’ first ride was a 1929 Model A roadster which he drove to work to his first job at a service station.  That dear old friend remains in their garage in their Tremonton home. As part of the furniture, every time our family moved, so did that car, which hadn’t been driven or even started until family and friends got together for a refresh and refurbish as a gift for Doug.

While in High school Doug and Carolyn John became sweethearts.  They were married on September 4th 1952.  They were later sealed for time and eternity in the Logan Temple.  Their first children arrived way too early and stayed but a few hours.  Melanie Ann and Randy Jay Allred were born in September of 1953.

Dad’s passion for cars was contagious as many of his kids and grandkids share Doug’s love of cars, mostly Cadillac’s!  He was CADCRZY as noted on a personalized plate he had.

When Doug and Carolyn first married, Doug ran the Beeline Service station near the Crossroads.  His part time job with family in tow, Doug was a rodeo clown for the Little Buckaroo Rodeo.  With face paint and baggie pants, and sometimes a toilet seat contraption used to locate bunnies in the arena, he would entertain!

Doug was always there to gather those that would go with him on hunting and fishing trips.  Grouse Creek for the deer hunt was an annual event with family which often included his brothers.

Over Doug’s life his jobs included a Service station at the Post Exchange in Dugway Utah, training at the Clearfield Job Corp, Industrial Construction, and Thiokol.  He had his real estate and his Brokers license, which he held until retirement.

Once retired Doug would spend his days making the rounds to the coffee shop, the body shop, and any yard sales he could pursue and attend.  His life was full and happy!

Special thanks to his Grandson Kirby Rhodes for sending him off in his favorite kind and color of hotrod!

Thank you to everyone at OUR HOUSE in Tremonton.  We are blessed as a community to have such a caring and wonderful resort.

In lieu of flowers, please share a smile or a memory and do something kind for someone. Pick up the tab for your friends at your local coffee shop!

All services will be held at Rogers and Taylor Funeral Home (111 North 100 East Tremonton, Utah) on Friday October 22, 2021, with a viewing from 9-10:30 am and the service to follow at 11:00 am. The service will be livestreamed and may be accessed below. Interment at the Brigham City Cemetery.