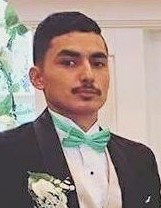 Eduardo Lopez (Lalo), 22, passed away on November 21, 2018. He was born on October 21, 1996 in Tremonton, Utah. He was the fourth son born to Angel and Lorenza Herrera Lopez. Lalo attended and graduated from Bear River High School in 2015. He participated on the wrestling team and the Water Polo team. He also played in the school band.

For the last few years of high school, he was working as a lifeguard at the Natatorium. Lalo loved the outdoors. He was very adventurous and loved to hike, camp, fish, and hunt with his friends and family.

After graduation from high school, he began working for ATK Thiokol in Promontory. He also worked for them at the Cap Canaveral in Cocoa Beach, Florida.

He was a member of the Santa Anna catholic Church.

Lalo is survived by his parents; brothers, Angel Jr. (Tracy), Emmanuel (Molly), Christian; his five nieces and two nephews (He was a fun and loving uncle); grandparents; and many cousins; aunts and uncles.