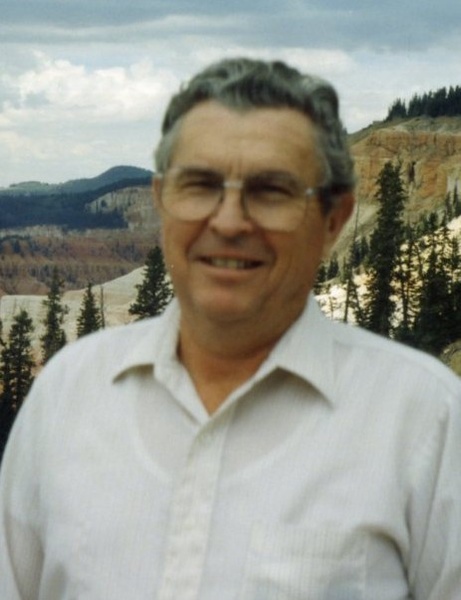 On August 19, 1950, Evan was activated with the 204th F.A. Battalion of the Utah National Guard. They were shipped to Fort Lewis Washington and trained until Jan 1951 when the Unit was shipped to take part in the Korean War (euphemistically called the Forgotten War). After ten months of combat, he returned to Fort Carson CO. to train other men as replacements in Korea. He was honorably discharged from the Army in April. 1952. In the fall of 1952, the family moved to Logan, Utah and enrolled at the Utah State University, where he made life long friends. He graduated in 1956 with a BS degree in Agronomy and went to work for the Bureau of Indian Affairs (BIA), in Spokane, WA. While working for the BIA, he was transferred to Gand Coulee Dam, WA, where he mapped the soils or the Colville Indian Reservation, then transferred to Fort Hall, Idaho as a Farm planner. He was instrumental in renting large acreage on the Fort Hall Reservation, which were idle at that time, thus providing an income for the Indian Land owners. In 1962, he left the Government and over the next 10 years, held several position including the County Extension Agent in Randolph Utah; fertilizer salesman for Phillips Petroleum Co.; field man for Utah Idaho Sugar Co.; farmer in Blackfoot, Idaho; farm adviser for American Oil; a stint at Hill Air Force Field as a Mechanic; and then he went to work for the Government at the Bureau of Land Management in the Salt Lake Area Office. After 10 years, he transferred to the Bureau of Reclamation as a Negotiator. While there, he was instrumental in obtaining the land for the Jordanelle Reservoir and other projects in the Upper Colorado Region, and finally retiring in Jan 1993.

Evan was devoted to family; he loved his parents, siblings, children, step children, grandchildren and great grandchildren very much.  Evan was faithful and true to his religion.  He was active in the Church of Jesus Christ of Latter Day Saints all of his life, and kept dear to his heart a love for the gospel. He served in many callings including Bishopric, Scoutmaster, Mutual President. He and Ethel served as ordnance workers in the Jordan River Temple. He served as host and usher at the conference center downtown, and really enjoyed that job. He loved to be of service. Evan was never happier than when someone came to visit; he kept life longs friends.  He loved traveling and farming most. He was a marvelous gardener, craftsman, musician.  He loved being busy and engaged. Later in life, he and Ethel spent their winters first in Yuma, AZ, and then St George, UT. He loved being in St George where many of friends also resided. Evan thought we all should be patriotic for he loved his country.