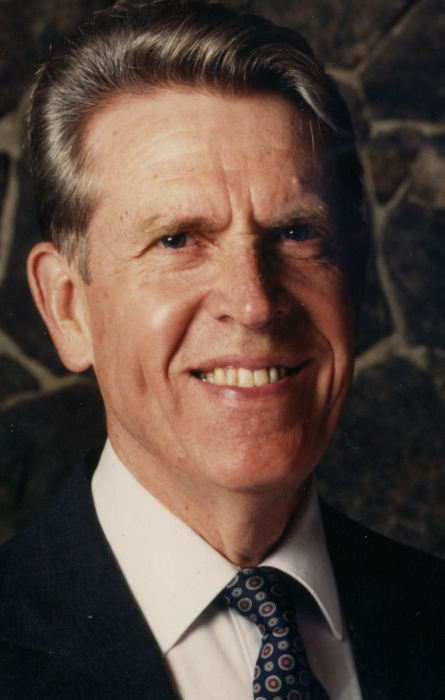 TREMONTON – Floyd Wendell Johnson, 91, passed away at home on February 23, 2016 in Tremonton, Utah. He was born on August 20, 1924 in Garland, Utah to John Ivan Johnson and Veva Andrea Hansen Johnson.

Floyd graduated from West High School in Salt Lake City, then served in the Air Force during WWII. He met Verla Merrell while on the military base in Deming, New Mexico. They were married February 11, 1945 in Bakersfield, California where he was subsequently stationed. They traveled to Salt Lake City the following month for their honeymoon, to be sealed in the Salt Lake Temple.

As a boy, he lived in Garland and Salt Lake City. After the war, he and Verla raised their family in Salt Lake, where he worked at the Utah Idaho Sugar Company. They then moved to Tremonton when he was employed at Thiokol. After retirement, Floyd and Verla served in the Missouri St. Louis Mission. He was a faithful member of the Church of Jesus Christ of Latter-day Saints, serving in many callings, including Bishop while in Salt Lake City. He and Verla served many years in the Logan Temple. He was involved with community and service organizations, loved oil painting, leather work, going to the operas, gardening, and especially sharing the fruits of his labors. One of his legacies is the huge amount of family history and temple work that he did and shared. Another special experience was building their treasured mountain cabin.

He is survived by his wife, Verla; children, Vicki (Ron) Ashton and Merrell (Renee) Johnson; sister-in-law, Verona Johnson; brother-in-law, Robert W. Johnson; 23 grandchildren and many great-grandchildren. He was preceded in death by two sons, Marc Johnson and Charles Johnson, and a granddaughter, Nicole Johnson.