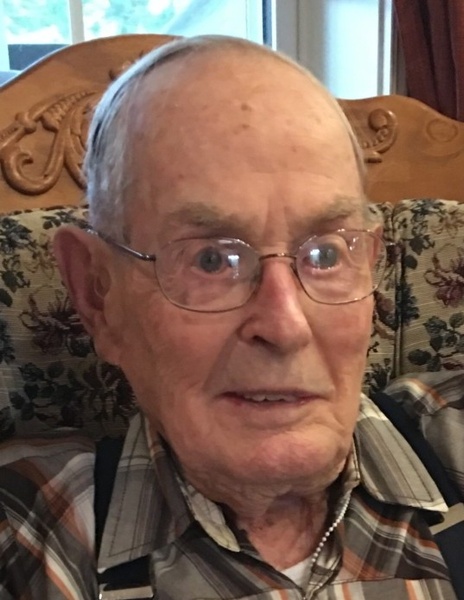 Grant Weyerman Bowen passed away peacefully on January 17, 2018 at the age of 95.

Grant was raised in Beaver Dam, and lived there for 90 of his 95 years, leaving only for a short time to serve in the military in both the Army and Air Force.

He attended elementary school in Beaver Dam, and graduated from Bear River High School in 1940.

Not long before leaving for his military duty, he met a cute young gal named Maurine Potter.  They wrote to each other while he was gone. Grant sent money and had his mother buy an engagement ring for Maurine, which she did.  His mother was also proxy for Grant in asking Maurine to marry him, and gave her the ring. Although they were engaged, when Grant ‘came calling’ after returning home, Maurine didn’t recognize him.  Telling that story always made him smile and chuckle a little bit.

Grant worked for Mendenhall Auto Parts, Quinney Auto Parts and Utah Power & Light, but his favorite work was done in his workshop where he created many beautiful clocks. Each of his children and grandchildren have one of these treasures, and some of his creations can be seen in businesses around Box Elder and Cache County still today.  Grant welcomed many of the new Beaver Dam residents with a clock to adorn their new home.

Bill, Kathie and Larry have many fond memories of their childhood, and growing up in Beaver Dam next door to Grandma and Grandpa Bowen.  Camping trips with friends, trips to Yellowstone, a homemade go-kart, and a tree swing over the creek are some cherished memories.

Grant had a great love for horses and spent many hours working his teams, building carriages and loved the opportunity to pick up the bride and groom from their wedding ceremony, and take them to their wedding breakfast.  He also enjoyed driving his teams in parades.  One special parade was in Brigham City when he was able to have Governor Norm Bangerter as a passenger.

He made it a hobby to raise sheep and to be a bee keeper.

Grant had a love for flowers, music and traveling.  His yard was always a floral treat as you arrived in Beaver Dam.  For many years he played the harmonica with the Westernaires, and loved the many gigs they had.  Even after leaving the group he loved to go to wherever they were playing to listen to their music and sneak in a dance or two.

Together, Grant and Maurine traveled, visiting many places and had fond memories of each and every trip.  One that was most memorable was a trip to the Holy Land.

Grant and Maurine worked together to make a home that was always welcoming to anyone who stopped, and all were welcome.