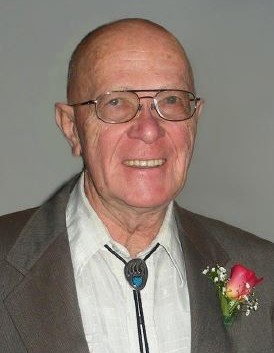 Harold (Hal), Merrell Petersen, 85 years old, was born July 24, 1931 in Elwood, Box Elder County, UT to Mary Lavon Wagstaff and William Petersen. He died October 21, 2016 at the Huntsman Cancer Institute in Salt Lake City, UT. Hal grew up on a farm where he learned to raise crops and tend the animals. He was an Eagle Scout and was involved with FFA.  Hal graduated with the Class of ‘49 from Bear River High School. Hal served an honorable, 3-year mission for the Church of Jesus Christ of Latter-day Saints in Denmark. He served proudly in the U.S. Army during the Korean Conflict. Hal married Dolores Marie Josephine Konschella in the Logan LDS Temple on September 5, 1956. He graduated with a B.A. in Business Administration from the American University in Washington D.C. After working for Allstate Insurance for several years he became an independent insurance agent and formed Hal Petersen Enterprises.

Hal was well known for his buffalo and loved the outdoors. He gave countless hours of service to his church and community. He particularly enjoyed transporting Veterans from Logan to their appointments at the VA Medical Center in Salt Lake City, UT.