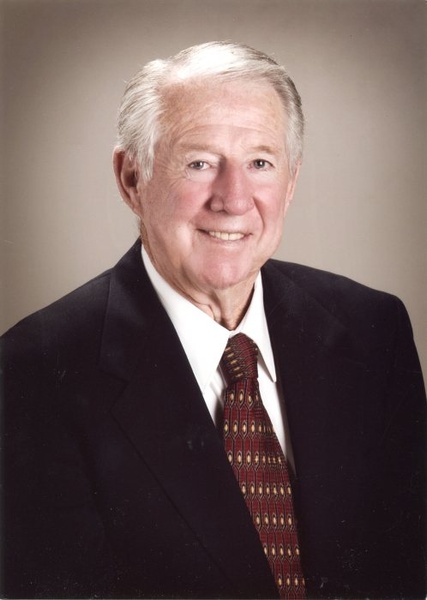 Jack Krey Fronk, age 84, passed away peacefully in his home on December 13th, 2019, in Tremonton Utah.

Jack was born in Tremonton, Utah on July 27th, 1935 to John Henry and Edna Ruth Krey Fronk. He married his high school sweetheart, Donna Petersen Fronk, on July 29, 1953 in the Logan LDS Temple, and they spent the last 66 years together.

Jack was a graduate of Bear River High School. He went on to play football at Utah State University and received his Bachelor of Science degree in Business and Social Sciences. He was an owner and partner of Fronk Chevrolet, and owner of Golden Spike Equipment Co.

He was a Sergeant First Class in the Army National Guard. He enjoyed golfing, skiing, hunting, fishing, and scouting. He was an Eagle Scout, and his encouragement and example led his three boys and seven of his grandsons to be Eagle Scouts as well. He was a lifetime member of the Skyway Golf and Country Club and was involved in the Kiwanis Club. .

Jack was a member of the Church of Jesus Christ of Latter-Day Saints where he served in many callings, including Elders Quorum President, Fourth Ward Bishopric, Stake Sunday School President, Stake High Council, and was an ordinance worker in the Logan Temple for five years. He and Donna served an 18-month mission together in San Diego, California.

He is preceded in death by his parents; a great granddaughter Raegan Jones; brothers Wayne and Parker Fronk; and his sister Marie Snyder.

Funeral services will be held on Saturday, December 21, 2019 at 11:00 a.m. at the Tremonton Stake Center with viewing from 9:30 to 10:30 a.m. prior to the services. Interment to follow in the Riverview Cemetery, Tremonton, Utah.

In lieu of flowers, please contribute to the Church of Jesus Christ of Latter-Day Saints missionary fund.