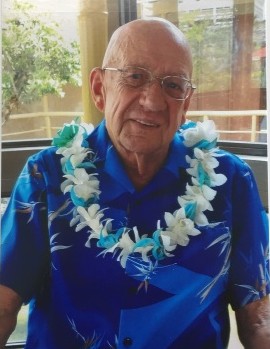 He was born in Tremonton, Utah to Robert Billings, and Eva Bessinger on July 22, 1936.

He graduated from Bear River High School in Tremonton, Utah.

He was then drafted into the Army, serving in Korea.  He was discharged on March, 1962.

Jim owned and partnered with his brother, Bill, in their Hardware store, specializing in the sales and servicing of water heaters.

He married his wife, Nanci on June 3, 1972, and they later moved to Ogden, Utah, where he opened his business there.

They then moved to Sequim, WA, where they owned and Jim managed a mobile home park.

After he retired, he and his wife spent many winters in Honolulu, Hawaii, where her family resides.

He loved the sunshine and extended family in Hawaii.

He also loved all sports, especially baseball, and knew all the statistics of the major league players in the American and National Leagues.

Graveside services will be held at the River View Cemetery on October 4, 2018, at 11 AM.

A reception will follow at Deweyville Town Hall, 10870 No Hwy 38, Deweyville, Utah.