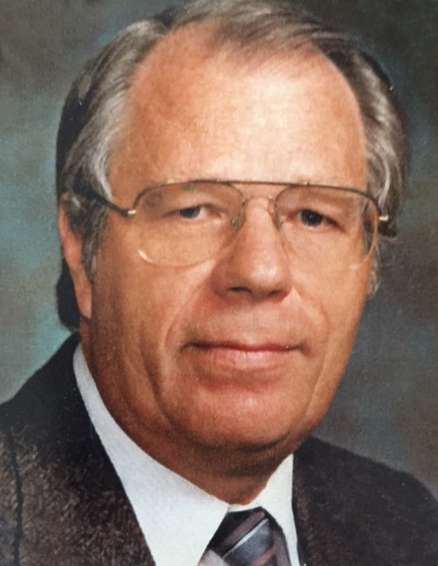 Born in Malad, Idaho in 1933 Jim spent his days helping his Danish grandfather in the family owned garage, fishing and playing marbles with his gang of friends self-named the Wild Horses and watching over his mother and dear sister. He lost his father at the tender age of 4 and missed him all of his life. After a time, his mother relocated to Garland, UT and eventually met and married Marion Sorenson whom dad cherished.

He attended Bear River High School where he met beautiful and popular Desse Coe. He was instantly smitten, and although it seemed unlikely, he shyly leaned over in a science class and told her one day he would marry her, much to her surprise. She laughed then but eventually he wore her down and the rest is history. Jim and Desse had 7 children

He graduated from Brigham Young University and after serving in the armed forces in Camarillo, CA and Ogden UT, and attended graduate school in Corvallis, OR. Jim’s career was engaging and satisfying to him using his degree in Geography and his love for nature he worked for the State of Utah in Water Resources and Development. He took a memorable 2-year consultancy working under the Shah of Iran on a hydrologic inventory connected to the Isfahan dam.

Upon his return he was appointed the Assistant Director of the Water Resources Department under Governor Scott Matheson and then as the Director of the Water Conservation Division in the Department of Agriculture under Governor Norm Bangerter.  Of note Jim consulted on the Great Salt Lake long-term plan as well as working on the development of several reservoirs and watersheds throughout Utah. His work was invigorating and exciting to him, he loved to conserve and preserve our natural resources.

He enjoyed birds of all kinds. As a little boy he hid abandoned chicken eggs in his closet to keep them warm so they would hatch. He could name most birds by sight and song and spent years attempting to naturalize quail and golden pheasants in his yard at the foothills of the Rocky Mountains. He loved the beauty and richness of the earth. When you asked him his favorite color, he said brown or rust -because it is the color of dirt. He loved to tinker on his mother’s farm and planted many beautiful tree lines. He was a registered pilot and amateur watercolorist.

Jim believed in Jesus Christ and always sought to follow Him.  He was a life-long member of The Church of Jesus Christ of Latter-day Saints and a gospel scholar. Dad loved family history and diligently worked at his genealogy and submitted hundreds of family names for temple work. Later he and mom served several missions for the church which brought them both great joy.

But we remember him best as a selfless, gentle, man who unconditionally loved and served his wife, children and their spouses, and a proud Papa of his  grandchildren and great-grandchildren ( none of us will forget his tickle-hugs and silly songs). He always put others’ needs before his own and encouraged us individually to know Jesus Christ and to serve Him.

Note the change of the place of service .  Services will be held on Tuesday, 8 September 2020. Viewing at 9:00 and funeral service at 10:00 am. Held at the LDS Chapel at 552 East 11400 South,  Draper, UT 84020 . The funeral service will be live streamed below.  Interment at Salt Lake City Cemetery. The live stream will start momentarily due to weather problems.