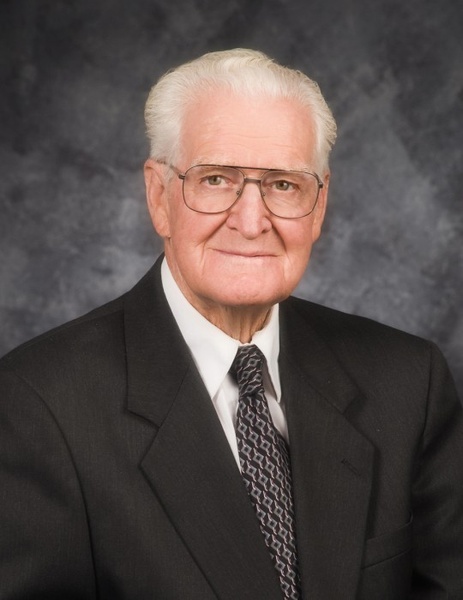 RIVERSIDE - Jay U. Macfarlane, age 98, passed away peacefully July 6, 2017 in Logan, Utah surrounded by his family.  He was born in Riverside, Utah on August 25, 1918 to Robert D. and Rowane Udy Macfarlane.  He was a lifelong resident of Riverside where he was a prominent member of the community.

Jay attended school in Riverside and at Bear River High School.  In his younger years, he became an entrepreneur, starting many businesses, including Jay’s Service Station at 17 years old.  Jay served an LDS mission from 1940-1942 in the Western States Mission.  Upon his return, he met his sweetheart, Cleo Moon.  At this same time, he was drafted into the United States Army.

Jay and Cleo were married on May 9, 1943 in Albuquerque, New Mexico.  The marriage was later solemnized in the Salt Lake LDS temple.  He was a devoted husband to his loving wife for 70 years.  Cleo passed away on July 17, 2013.

After being drafted, Jay attended boot camp at Jefferson Barracks, Missouri.  The Army Air Corp trained Jay to be an aircraft mechanic.  He served his country dutifully holding the rank of Corporal during World War II in Northern Africa and Italy.  He was very proud of his service and could recall details until the day of his passing.

In the years that followed, Jay and Cleo became the parents of four children:  Ronald Jay, Robert Brent, Carol Ann, and Loralee. He continued Jay’s Service Station and started Jay’s  Grocery and Jay's Motel.  He was Postmaster of the Riverside Post Office from 1951-1989.  He was instrumental in the organization of thre Riverside-North Garland Water Company in 1973 and volunteered over 30 years of service as president, watermaster and secretary.  Over the years, Jay could be found voluntarily working in the town park in Riverside.

Jay was chosen as a scoutmaster to attend the Boy Scouts of America National Jamboree at Valley Forge, Penn., in 1964.  Over the years he has received many awards for his service in the organization including the district award of merit and the Silver Beaver.

Jay had a strong testimony of the gospel of Jesus Christ and was a lifelong member of the Church of Jesus Christ of Latter Day Saints.  He served in many leadership positions, including bishopric, stake mission presidency, stake MIA president, ward Sunday school superintendent, temple ordinance worker, and stake high council.

Jay was preceded in death by his parents and eleven siblings; his beautiful wife and sweetheart, Cleo; and, his daughter, Loralee.

In Lieu of flowers please make donations to the LDS missionary fund.