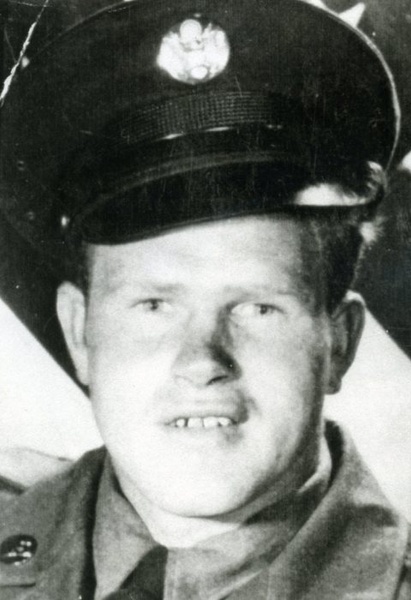 “Our loss is heaven’s gain…”

On August 7, 2016, on a beautiful Sabbath day, our beloved husband, father, grandfather, great grandfather and friend, JDell Douglas   Petersen, passed away quietly and peacefully at home, surrounded by his loving family. He was born on July 20, 1929 in Thatcher, Utah, a son of Nels Christian and Dagmar Mary Andersen. He married his “Honeyville Honey,” Charlene Benson of Honeyville, Utah, on May 28, 1953 in the Logan LDS Temple. JDell attended school in Thatcher Elementary School and Bear River High School. He served in the US Army during the Korean conflict in Camp Roberts, California– with special training in field artillery and as an anti-aircraft gunner.

JDell was raised on a family farm – growing up during the years of the Great Depression. As the youngest of a family of six sons and four daughters, JDell was a devoted son who tended his aging parents and took over the family farm, which, in turn, became his life-long profession. Following their marriage JDell and Charlene raised four sons - Brian, Brad, Shane, and Steve.

He loved outdoor activities such as fishing, hunting, and camping as well as traveling and enjoying the outdoors with his family. He was renowned for his love of music, his songs, laughter, positive outlook on life, his strong work ethic, his creative problem-solving, his love for and service to others and his strong testimony of the gospel of Jesus Christ.

He was a devoted member of the Church of Jesus Christ of Latter-Day Saints. He served in many church callings during his lifetime including scoutmaster, Elder’s Quorum Presidency, Stake Seventies Quorum, ward clerk, stake high councilor, and eventually was called to be bishop of the Thatcher-Penrose Ward. For two years, JDell and Charlene served faithfully as church membership missionaries in the St. George area.

A significant portion of his later years was devoted to the purchase of property and the design and the building of the family “dream home” located in Silver Reef in southern Utah, which they enjoyed for nearly fifteen years. There JDell and Charlene hosted many family and friend gatherings and adventures there during the 1980’s and 1990’s. Following the sale of their home in southern Utah, JDell and Charlene returned to Thatcher, where he had his final home-building project and helped create, design, landscape, and build their family home.

He is survived by his devoted wife of sixty three years, Charlene; sons and their wives - Brian (Carol), Brad (Connie), Shane (Lori) – all of Thatcher, Utah and Steve (Jill) Petersen of Warrenton, Virginia, as well as sixteen grandchildren and twenty two great grandchildren, with another two eagerly awaiting to arrive. He was preceded in death by his parents, siblings – Wilma, Sarah, Vernon, Ruby, LeRoy, Willard, Violet, Harvey, Harry, and one great grandson, Stetson.