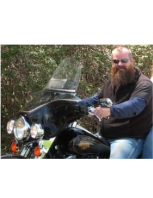 Upon the death of his parents when he was three years old, Michael joined the family of Joyce and VerNon Harris.

Mike played football while attending Westside High School in Dayton, Idaho.  He served in the Army as a military policeman. He was an over-the-road truck driver for most of his life and loved seeing and exploring new places across the country.  His favorite activities included monster trucks, motocross and truck pulls, riding his Harley-Davidson, and being in the mountains. He loved cars and working on motors.

He was preceded in death by his parents, his father VerNon Harris, and his grandparents Charles and Isabelle McNeely, and R.A. and Evelyn Christensen.

A graveside service will be held Thursday, October 15, 2020 at 11:00 at the Riverview Cemetery in Tremonton, UT.