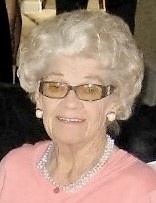 Jill Johnson Cannon passed away peacefully July 14, 2017 at 89 years of age.  Born in Richmond, Utah on July 23, 1927, Jill was the third daughter of Heber Guy and Emorett Stoddard Johnson.  A graduate of Bear River High School, she later worked as Secretary to the Principal for 33 years before retiring in 1987.  She married Owen Laub Cannon June 8, 1946, with their marriage being later solemnized in the Logan LDS Temple.

She organized and advised the BRHS Future Nurses Club, and was honored in 2000 as an Outstanding Alumnus.  She was held in high regard from both peers and students during her tenure in the school system   A devoted member of the LDS Church, she enjoyed serving in a wide variety of roles and functions, including as an Officiator in the Logan Temple.  Other community involvement included serving as a member of the Utah State Diabetes Board, Girl Scout Leader, and as a Pink Lady at Dixie Medical Center in St. George, Utah.

Jill is preceded in death by her husband Owen, infant son, two sisters - Tess and Peggy, and two brothers - Jack and Tom.  Jill was the last surviving member of her family, and she is no doubt pleased to be reunited with them.

Jill’s family wishes to express their gratitude to the staff of the BeeHive Home in Perry for their loving care and compassionate service to our dear mother in her final months, as well as to all of Jill’s friends, associates, and extended family for their kindness on her behalf.