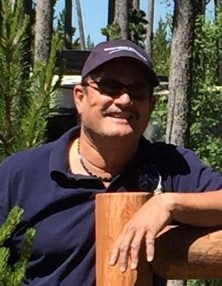 John Steven Batis passed away peacefully in the home he built to retire in surrounded by family February 1, 2022, in Tremonton, Utah. His positive spirit and beautiful smile never wavered through the last months of his journey. His strength, bravery and grace will be remembered and cherished by his family and friends who loved and witnessed it.

Steven was born on October 28th, 1959, in Gooding, Idaho to John Batis and Helen Gay Capener.  Shortly after Steven was born the family moved to Tremonton where the community became a large part of Stevens life from a young age.  He was involved in scouting and earned his Eagle Scout with great leaders and his mother’s encouragement. Steven graduated from Bear River High School where he sang in the choir, swam freestyle on the swim team and earned the nickname "Smiley" cause he always had a smile on his face and that dimple. He was the oldest son of 7 children: Susan, Steven, Shelli, Sherri, Shawn, Shane, and Stacy.

Steven knew right away he wanted to help people, so at age 21 he submitted a letter of interest to Tremonton City volunteer fire department and on October 1st, 1981 he was sworn in at Fire Drill. Over the next 40 years he served as Captain, Assistant Chief and retired as Chief.  He began his full time Firefighter career in 1983 at Thiokol where he worked hard to move up the ranks. Steven always loved learning and looking for ways to educate himself and willing to enroll in any training courses to better serve as a firefighter and his community. He earned his Fire Science Degree in August 2006 from Utah Valley College.

While working firefighter shifts Steve started working as a carpenter for Kris Oyler and York Coburn and eventually earned his own Contractors license in November 2009. He loved working with his hands and shared his time, talents and tools with anyone needing his help.

In 1985 Steve fell head over heals for a girl at the coffee shop and after a few weeks of dating asked her to marry him in around about way and they truly have lived happily ever after. Steve and George Ann Sato married June 1, 1985, and raised 2 beautiful daughters: Stevie Jo (Mykel) Stettler, Queen Creek, AZ, Lebriann (Trever) Gibbons, Brigham City, and was blessed to be Papa to Korver John Stettler and Adley J Gibbons, the lights of his life grandchildren. Together Steve and Georgie felt they could do anything and enjoyed building their life together as a family camping, traveling, laughing, loving, and watching their children grow into loving, kind adults and building their own beautiful families. Steve’s girls gave all their strength, love and support to a father they admired and loved more than anything. He was so proud of them.

Georgie would like to give her heartfelt love and appreciation to so many friends and family who have lifted us and barred our burdens through this last year. We are truly blessed to be surrounded by so many wonderful, caring people who gave so much of themselves to help us. We would also like to recognize and thank Dr Schow, Tara and their staff at Bear River Medical Arts, Dr Brogan, Dr Soares and their team at the Huntsman Center and Kents pharmacy staff. We are grateful to have had so many knowledgeable, compassionate, caring professionals working so hard for Steve. You truly made it better.

Services and Firefighter honors will be held Friday, February 11, 2022 at 11:00 am at the West Stake Center, 345 South 1000 West in Tremonton followed by a Celebration of Steve's life. The service will be livestreamed below.

In lieu of flowers Steve would have wanted you to take your loved ones out for ice cream, smile and make a fun memory that last longer than life itself.