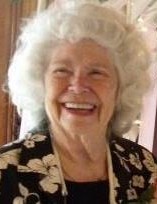 On Memorial Day, May 30, 2016, our beloved mother, grandmother, and great-grandmother Joyce Chamberlain Woodward returned to her Heavenly Father. Joyce was born on January 6, 1930 to Helen Elizabeth Reese and Walter Alonzo Chamberlain. She was the third of five children. Joyce grew up at Crystal Springs and claimed the she was born in hot water. Joyce married Donald James Woodward on August 5, 1948. They were sealed in the Logan Temple on February 24, 1950. They were divorced in 1972. They had six children: Vickie (Dennis) Harper, James (Melba), Wendie Herland, Gary (Rena), Lonny (LeAnn), and Janay Hansen. She had 20 grandchildren, 43 great-grandchildren and one great-great grandchild.

Joyce was an active member of the LDS church and held numerous callings in each organization. She served two missions one to Omaha Nebraska, Winter Quarters Mission and one to Montreal Quebec. Joyce worked hard all her life at many different jobs. She finally retired at the age of 82. Then, she volunteered at the Bear River Valley Hospital, the Senior Citizen Center and the Genealogy Library. She loved square dancing, playing the cornet and walking with her friends in the mornings. Her family was her most important treasure.