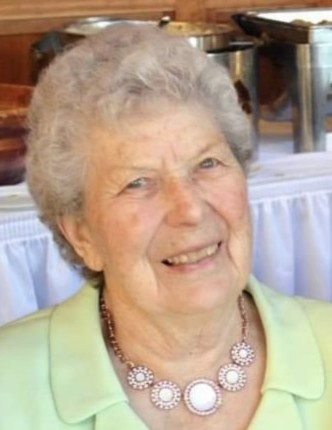 Kathryn Anderson Lind passed away peacefully on January 20, 2022. She was 91 years old. Kathryn was born to John and Leona Krumperman Anderson on July 27, 1930, in Bothwell, UT. She had an older brother, Willard Anderson. Her childhood was spent in Bothwell and in the summer she would go with the family to Monte Cristo and Park Valley where her Dad was a government trapper. She excelled in school and the only grade she got below an A was in Homemaking. She, however, became a most amazing homemaker. She met her future husband one day at church shortly after he returned from the war. They married on September 30, 1948, in The Church of Jesus Christ of Latter-day Saints Logan Temple in Logan Utah. They settled at the Lind homestead in Lynn, Utah. That winter was one of the coldest and snowiest winters ever recorded. After that winter they relocated to Bothwell. They lived there for the next 14 years raising their 6 kids and working their farm. To make ends meet, Oscar found additional employment which left Kathryn to take on some of the farming while caring for her family and home. Her brother and his family moved to Montana and subsequently the Lind family would make trips to visit the cousins. Oscar got bit by the Montana bug and in June of 1964 he and Kathryn moved their family to the grand state of Montana. Kathryn was not thrilled with the move but before you knew it she had fallen in love also. She was an extremely hard worker and took pride in whatever task was placed before her. She always had a large garden and when they harvested she was busy canning. At Christmas time she would make her famous English toffee and dipped chocolates. She was the best cook and most every Sunday she had a big dinner for family and friends. She did this well into her 80’s. Her grandchildren and great grandchildren loved going to Grandma Lolo’s for Sunday dinner. She was an active member of The Church of Jesus Christ of Latter-day Saints and served in many callings within the church over her lifetime. She was the church organist from the time she was a teen-ager. Her last calling was primary pianist which she did up until last November. She and Oscar served a mission in Atlanta, Georgia in1996-1997. Her favorite calling was serving with her husband in the Spokane Temple. Kathryn had a strong testimony and unwavering faith in the Lord Jesus Christ. Kathryn and Oscar loved to travel around the country after Oscar retired. They traveled a lot with their good friends Elmer and Selma Wiedmeier. Preceding Kathryn in death were her parents, her husband, her brother, 2 grandchildren, Mckelle Wiser and Jennifer Janetski and 3 great grandchildren, Joshua Gardanier, Stanley Lind, and Trysten Janetski. Surviving are her 6 children Tom (Judy) Lind, Vicki (Lee) Janetski, Nancy Wiser, Susan (Luigi) Yannotti, David (Bonnie) Lind, Corey (Lori) Lind, 24 grandchildren and 51 great grandchildren. Also surviving is her sister-in-law Virginia Anderson, and her husband’s brother Marvel (Junelle) Lind, his sisters Ellen (Hyrum) Olson and Virgene (Denton) Darrington and many loving nieces and nephews and their families. The Lolo Ward which she was a member of for over 30 years and her ministering angels, Shari Edward’s, Peg Schmidt, Carol Nyman, Cathy Crist, Myra Horner and many others in her church and community.