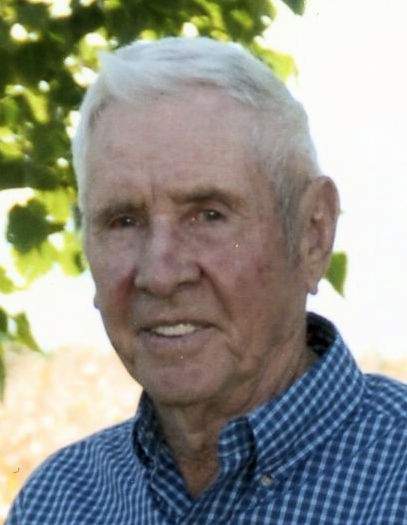 Keith John Barfuss, our loving husband, father, grandfather and friend, passed away on November 27, 2018 in Tremonton, Utah, at the age of 93.

Keith was the sixth child of twelve, born to Charles and Winifred Barnes Barfuss in Tremonton where he grew up working on the family farm.  He enjoyed playing softball, volleyball and basketball.  He also became a talented dancer and enjoyed attending dances with his friends on the weekends.  At one special dance in Honeyville, he was introduced to the love of his life, Cleo Bowman, and he began dancing his way into her heart.

Their courtship was interrupted when he was drafted into the U.S. Army during World War II. He was assigned to guard ammunitions in the Panama Canal Zone.  After his honorable discharge, Cleo was still waiting for him and they never missed a dance from then on.

They were married in the Idaho Falls Temple on September 12, 1947 and made their home in Tremonton where he began farming and where he and Cleo raised their five children.

Keith had a great love of the land. He enjoyed farming  for about 30 years before he took another job working for the Church of Jesus Christ of Latter-day Saints as a member of the Tremonton Preventative Maintenance Group, where he worked for another 20 years and enjoyed the relationships he had there.

He was an active member of the Church of Jesus Christ of Latter-day Saints and served in various callings. His most enjoyable calling was serving with Cleo as ward, stake and region dance directors for many years.

He loved being with his family and going on trips together where many great memories were created. He and Cleo also loved getting together with family and special friends often to play games.

Keith and Cleo loved to travel and went on numerous trips with family and good friends. While in their 80’s, they were able to take all of their children and spouses with them on a Panama Canal Cruise. A highlight was when they surprised their children by actually going on a zip line through the rain forest in Costa Rica!

Keith was known for his unique friendliness to ALL people. His friends and family were constantly amazed at how he could so easily strike up a conversation with a total stranger. He was admired for his natural ability to fix anything, his sense of humor and his crazy, fun-loving ways.

Keith was a hard worker who never quit until he finished the job. He was generous and kind and his life was one of service to others.  He knew what it meant to minister, especially to the widows of his ward.

We are grateful for his life, his example to his family and for our many memories of him. Keith was a devoted husband and father. He loved his family and friends and will be dearly missed.

Keith’s family is especially thankful for the tender care he received from the staff at Our House Assisted Living.