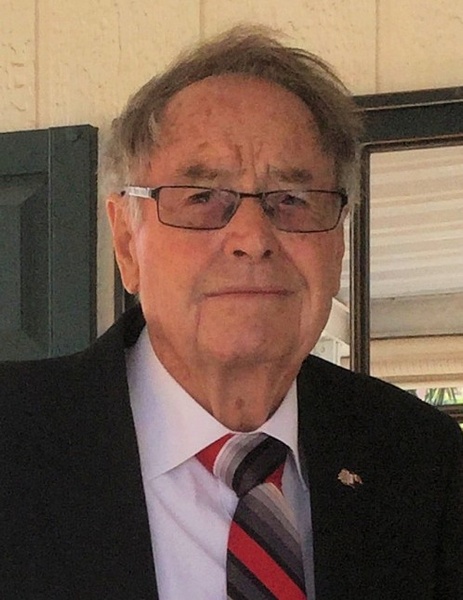 LaMar Bourne, Father, Grandfather, Great Grandfather, Uncle, and friend to all passed away at the home of his daughter Lori Thursday April 8, 2021 due to incident of age. He was born April 23 1928 to George Vernon and Florence Ireta Hess in Fielding, Utah. He was the seventh of eight children.

He married Annivor (Ann) Petersen March 19,1953 at the home of a Bishop in Las Vegas Nevada. The marriage was later solemnized in the St. George Temple in 1974 where they were sealed to their children. He was a caring father, husband and grandfather. His loving and friendly greetings always included some type of compliment. He had an infectious laugh and a wonderful sense of humor.

After graduation from Bear River High School LaMar enlisted in the United States Navy December 1950 serving on the USS Juneau during the Korean War. After his discharge from the Navy October 5,1954, he attended Utah Agricultural College later to become Utah State University, graduating with a Bachelor Degree June 1958 and later Master’s Degree in Education Administration. He was a Teacher, Counselor, and Vice Principal at Bear River Jr. High and High Schools. In 1966 he accepted a position as Vice Principal at Clark High School and the family moved to Las Vegas Nevada. They would return to Utah in 1979 when he accepted a position as Vice Principal at Bear River High School and later Principle of Box Elder Jr. High School, retiring in 1998.

He was a faithful member of The Church of Jesus Christ of Latter-Day Saints and served in several bishoprics.

His hobbies included yard work, gardening, and collecting rocks from all around the west that were used to decorate their homes and yards. Each rock had a story of where and how it was found. His all-time favorite hobby was working on and around the family farm. Adding to that enjoyment included visiting with local friends, neighbors, and family. He would put over 500,000 miles on the little black Toyota traveling to and from the farm. He was also known for his chocolate making.

The service will be livestreamed and may be found at www.ruddfuneralhome.com under his obituary.