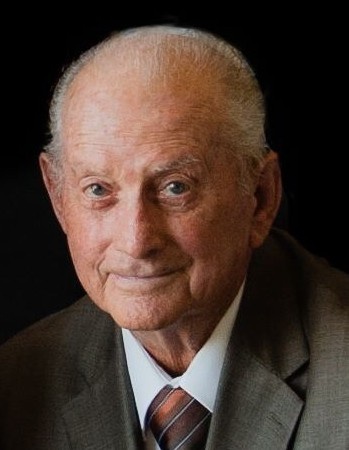 Our loving father grandfather, brother and friend, Leon Hans Andersen died on Monday, January 17th surrounded by his loving family.  He was born on August 16, 1929 in Blue Creek, Utah on the family farm, a son of Hans Jacob and Irene Mendenhall Andersen.  He started walking when he was 6 months old because his little sister Eva was coming soon.  His parents kept him home from school an extra year so he and Eva could start together.  He excelled at diving at Bear River High School and graduated with the class of 1948.  It was while in high school that he met his sweetheart Erma Oyler.  They were married on September 7, 1948 in the Salt Lake LDS Temple.  They started their family in Garland and later settled in East Garland where they raised their six children.

Dad was a member of the Box Elder Sheriffs posse where he served as top hand, Chief and the secretary for many years.  He made lifelong friends while in the posse and enjoyed all of the activities.  He loved dancing with his sweetheart, a good game of pinochle or 31 and being with his family, camping, cookouts and just being together.  If his kids or grandkids were involved he was there cheering them on. He was quick to tell the story about the time he played on a family and friend co-ed softball team after his retirement and hit a home run while wearing his dress shoes. Dad worked at Thiokol for many years in the Facility Maintenance and Construction department where he retired after 30 years of service. He was proud of his badge number (98).

Dad was active in The Church of Jesus Christ of Latter-day Saints and served in many callings.  Some of his favorites were Bishop’s counselor, Stake Sunday School, Young Men’s President and Ward Mission Leader.  He loved the gospel and his Savior and showed it by serving and loving people.

Dads’ life was his family and he shared his love in many different ways.  He had a special place in his heart for every one of us. He had a way of making everyone including strangers feel like they were part of his family.

The family would like to thank our sister Kathy for welcoming Dad into her home and taking such good care of him.  Special thanks to the staff at Bear River Valley Hospital.  In lieu of flowers, please take your kids or grandkids for ice cream and make a memory.