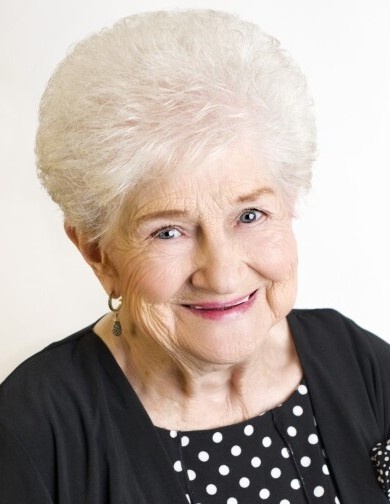 After 42 years, Mark came to collect his bride to join him in Heaven on February 20, 2022.  LouJean Ellaree Ballard Wise was born on February 7, 1932 to Guy Edward and Lillian Ellaree Andrews Ballard.  LouJean spent her childhood between the family farm in Hansel Valley, and the family home in Tremonton.  She graduated from Bear River High School.  In grade school she was given the nick-name of “Beany”, which stuck with her throughout her life.  Mom also attended USU where she was a First Chair violinist in the USU Orchestra.  LouJean married L. Mark Wise on December 27, 1950 in the Logan LDS Temple.  Together they had three daughters.  Robyn Dawn (Scott) Dickson, Shirley Jean Colvin, Dianne (Phil) Albright.  Mom worked at City Drug for a few years at the beginning of her marriage. Then, after Dad passed in 1980, she started working at Norlund’s Clothing Store, and then spent several years at Christensen’s Clothing Store.  She also volunteered as an Election Voting Official.  In 1962 she helped found a neighborhood “Pinochle Club”.  They played cards every month for the past 60 years, with their last get-together this past December.  These ladies were some of her very best friends, and Mom almost never missed a Club Date.

Family and the Gospel were her top priorities.  She cherished her family and delighted in spending time with them.  She had the best sense of humor, a sweet disposition, a never ending twinkle in her eye, a kind heart, and a smile on her face for everyone she met.  She was famous for her fried chicken and holiday caramels.  She lived a selfless Christlike life, taught her family the same through word and deed, and never complained.  Mom held several church callings, including Primary Secretary, Primary Teacher, Relief Society President, Extraction Worker, and Temple Worker.  She and her sister Colleen worked side by side for several years in the Logan Temple after their spouses had passed.  Mom and Aunt Collen kept See’s Chocolates in business, with a love for their famous chocolates.

Mom was preceded in death by her parents, Guy and Ellaree Ballard, siblings, Dorothy Harris, Denzil Ballard, Colleen Hansen, and Euphemia Ballard. Along with one grandbaby, Phillip Mark Albright, who died at birth.  She is survived by her three daughters, Robyn, Shirley and Dianne, sons-in-laws Scott Dickson and Phil Albright, 11 grandchildren, and 8 great-grandchildren.

A visitation will be held at the Tremonton Stake Center, 600 North 300 East, on Friday February 25th, at 10:00 am until 11:30 am, followed by a graveside service at the Garland City Cemetery.