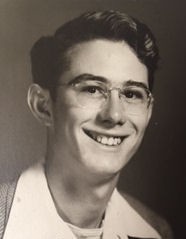 He was born March 31, 1929 in Tremonton, Utah to Amos Filbrun and Una Lenore Pierson Johnson.  He was the third of four children.

In 1943, at the age of 14, Lowell and his father Phil opened “Phil’s Service Station” on the corner of Main and 1st West Street in Tremonton. He spent his youth and attended school in Tremonton, graduating from Bear River High School in 1947.

On August 19th 1950, he joined the 204th Field Artillery Battalion.  After training at Fort Lewis, Washington he was deployed to Korea in February of 1951 where his unit gave distinguished service and played a crucial role in the Korean War.

Upon his return in 1952 Lowell bought half-interest in the service station.  He and his father worked as partners until 1962, when Lowell’s father retired and he became the sole owner and manager for 32 years.

In 1964 he went into partnership with his best friend Max Mason and expanded his business by adding a carwash.  He also sold used cars from his lot for C&R Auto Sales.

He was an active member of the Church of Jesus Christ of Latter-day Saints.  He enjoyed serving in the Scouting program, as a Stake Missionary, as the Stake Mission President, the Ward Financial Clerk and in other auxiliaries of the church.

Lowell took an active role in the community. He served four years on the city council, running on the campaign to “help make Tremonton one of the most beautiful cities in Northern Utah.”

He also served four years on the school board and three years as the Director of the Bear River Chamber of Commerce.  While serving on the hospital board he was influential in establishing the Bear River Valley Hospital in 1976.

Dad taught his children the value of hard work.  He was a great example to his family and friends.  He valued integrity and an honest day’s work. He enjoyed conversing with people, no one was a stranger, and he considered everyone a friend.  He loved a good joke and loved to make others laugh.

He loved being with his family, vacationing at Bear Lake, golfing, and a good conversation.

We send our heartfelt thanks to the wonderful care-givers who lovingly cared for our father at the Legacy House Assisted Living facility and the Intermountain Health Care in Logan, Utah.

We express appreciation to the Rudd Funeral Home of Tremonton, Utah for their thoughtful attention to the needs of the Lowell and Renee Johnson family.