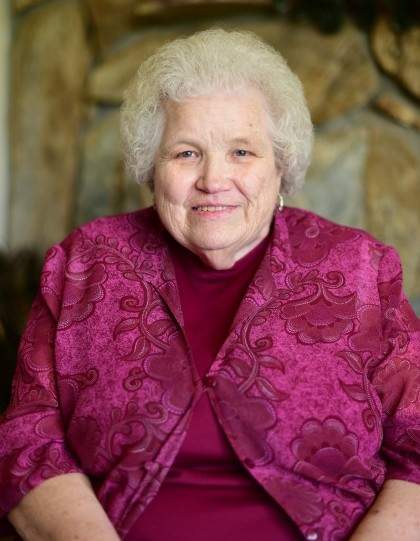 Marva Lee (Marriott) Mason, 80, passed peacefully from her earthly home on Feb. 9, 2019, in North Logan, Utah. She won her battle with lymphoma but suffered the consequences that ensued.

Marva was born January 14, 1939, to Arthur Golden and Zina (Valentine) Marriott at home in Garland, Utah. She was welcomed by her big brother Karl and later she welcomed her younger sisters Dorothy and Arlene.

She was raised in Garland and attended Bear River High School where she was active in band playing the flute.

Marva was a stay at home mom for many years. When she did venture out into the workforce, she worked at Brigham Apparel in Brigham City, was a secretary at the radio station in Tremonton at the time it shut down and finally worked for Canfield Nutrition in Tremonton. When they closed the local office, she continued to work from home for them for many years.

She was a member of The Church of Jesus Christ of Latter-Day Saints. With five children at home she earned her Golden Gleaner Award. She held callings as a Stake Young Married Leader, primary teacher, mutual teacher and MIA officer. She was work director in the relief society and she spent many years as a cub scout leader; a calling she excelled in and spent countless hours helping young boys learn fun skills as well as life skills. She held an active part in the Scouting program until retiring at the age of 76 due to health issues. As a scout leader she earned her Wood Badge Award, District Award of Merit and the Silver Beaver Award.

She was preceded in death by her grandparents, her parents, son Dallin J. Mason, grandson Dallen Carey Mason and grandson Brandon Dworshak.

A viewing will be held Saturday, February 16, 2019, from 9-10:30 a.m., with funeral services following at 11 a.m. at the Belmont Church (16925 N 5200 W Riverside, Utah). Interment will be in the Plymouth Cemetery. Compassionate service provided by the Plymouth Ward relief society.

Special thanks to all those who treated and cared for her in her last days.