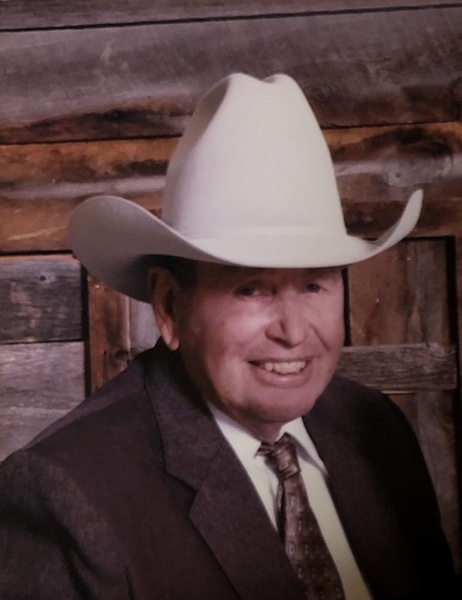 Melvin Dee Kunzler, of Park Valley, Utah rode out of this world on November 19, 2019. Dee was born December 25, 1924, in Brigham City, Utah to Harold and Vinnie Rose Kunzler and was the oldest of three children. His sister Kenna, (Merlin Tanner) passed away in 2011 and his sister, Rhea (Paul)Smith currently lives in Rexburg, Idaho.

Dee grew up in Rosette and graduated from Box Elder High School in 1944. He served in World War II and upon returning home, he married his high school sweetheart, Melva Tracy, on July 10, 1946 in the Logan Temple of The Church of Jesus Christ of Latter-day Saints. They settled on the family ranch in Rosette, where he has lived for the last 94 years. Melva passed away in April of 2008 and Dee has missed her greatly during the past few years.

He has ranched all his life and was awarded the Rancher of the Year in 1979, The Rancher’s Legacy Award in 2008, and Box Elder County’s Cowboy of the Day in 2009. For nearly 28 years, he was an assistant brand inspector and was the Park Valley meteorologist for about 25 years.

He has held several church callings. His preferred things to do were visiting with his family and neighbors, read the newspaper, ride in the pickup with the boys and watch the National Finals Rodeo each year. Fall was his favorite time of the year and he racked up many miles on the back of a horse each year gathering cattle and hunting deer. Good horses, marathon horse races, Hereford cows, and Border Collie dogs were at the top of his list of favorites. Those that rode with Dee always enjoyed the stories he told. His stories are legendary throughout the valley! The ranch in Park Valley where Dee grew up in now over 100 years old and his grandsons and granddaughters, Will, Danie, Nick, Bradley, Kassie, Cherlyn, and Hope are currently the fifth generation to live on the ranch.

“It wasn’t too bad to give up the keys to the car but when the reins to my horse were set aside, it was a tough blow,” Dee said. No one can ever call Dee a “Quitter”. The past two years have been a rough ride for him but he continued on because he had a hard time leaving the valley and the people he loved. Dee has taught his kids that the best things in life are not things. They are family, friends and good neighbors.

Dee is survived by his three children: Cheryl (Glen) Leak, Marilyn (Stan) Moncur, and Del Dee (Kellie) Kunzler. He has 14 grandchildren and 28 great-grandchildren. Dee was preceded in death by his son, Tracy Kunzler, his wife Melva, his parents, Harold and Vinnie, and his sister, Kenna. A special thanks to Hospice (Wendy and Kelly) for their exceptional care and kindness towards dad. Also, to his grandsons, Will, Brad, and Nick for their unfailing care in his last years of life.