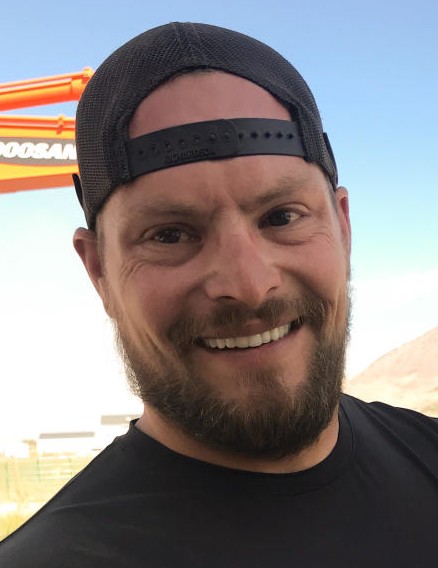 Mike Hansen, age 36, died on February 7, 2021. Mike was born on January 26, 1985, in Littleton, Colorado, to Wayne Anthony and Kristine Wilde Hansen. As a child, he was always smiling and we were smitten. He was the fifth child in the Hansen clan, joining Sam, Melissa, Sara and Steve; Scott rounded out the group later.
He played and excelled at sports as a youth, he could slam a ball over the fence, which was his signature. He couldn’t be bothered to run all the way around the bases. He wore out multiple bicycles tearing around the Oak Lane neighborhood in Farmington.
Mike played football at Viewmont High; no opposing quarterback wanted to play when Mike was on the defensive line.
He married Tera Horrocks in 2006, later divorced.
If you needed work done, Mike was your guy. He just knew how to do things and he was a strong as an ox. He worked in excavation. He loved fast cars, ATV racing, big machines and being outside.
He had an artistic bend; he was a landscape designer and loved to draw. He was also a musician and favored guitar.
He is survived by his parents, Wayne and Kris; his brothers; Sam (Jen) Hansen, Steve( Amy) Hansen and Scott (Beatrice) Hansen and his sisters; Melissa (Marlow) Randolph and Sara (Andy) Buyers.
He leaves seventeen nieces and nephews Garret, Shelby, Josie, Chloe, Nate, Jacoby, Aliyah, Maya, Madison, Taylor, Ava, Ruby, Finn, Ben, Sam, Joanna, and John.
He is also survived by his grandmothers, Myrla Wilde and Marie Hansen and many aunts, uncles and cousins and friends.
His Love, Dani Davis and his “son” Dayton survive him, well as his best friend, Moto.
He is preceded in death by his grandfathers, LeMont S. Wilde and Vernon A. Hansen.

THE SERVICES HAVE MOVED TO RUDD FUNERAL HOME (1234 S. MAIN- GARLAN). IT WILL STILL START AT 10:30 A.M.
A private graveside service for will be held, Saturday, February 13 at the Deweyville Cemetery at 1030 A.M., followed by an open house celebration at Wayne and Kris’ at 9587 North 3050 West, Deweyville, Utah.
A Facebook page is set up for remembrances; “Celebrating the life of Mike Hansen”.