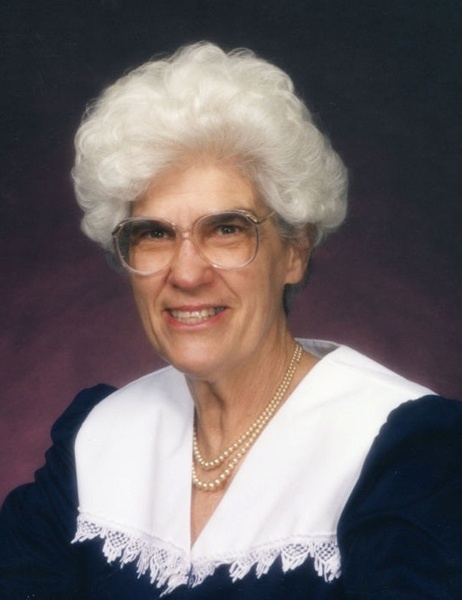 Nancy Mayree Powell Frost Rhynsburger died 6 June 2017 at the home of her daughter with family members present. Nancy was born 12 March 1926 in Coalville, Summit Co., Utah to Parley “A” and Olive Cox Powell, the eighth of ten children. She was raised in Upton where her father purchased a farm. She attended grade school in Upton and Coalville. She graduated from North Summit High School in 1944 and entered the U.S. Cadet Nursing Program at W.H. Groves LDS Hospital with classes at the University of Utah for the first six months. She graduated with her RN degree on 12 June 1947.

The family farm was sold in 1945 and she moved from the Nurses’ residence to live with her parents at 604 Browning Ave. where she met her future husband, S. Charles B. Frost at ward choir practice. They were married 20 June 1947 in the Salt Lake LDS Temple for Time and Eternity. They had six children: Charlene (Arly) Pedersen, Kenneth (Ellen) Frost, Lucille (Reggie) Davis, Lemar (Peggy) Frost, Yvonne (Gary) Manning, and Melvyn (Marlene) Frost. Charles passed away on 22 February 1967 from a lingering illness eleven years after a stroke.

Nancy married Lourens Rhynsburger on 18 September 1972 and gained 3 step children: Yvonne (David) Low, Rennie, and Wendall (Barbara) Rhynsburger. After the children married and they didn’t need the big home across from Liberty Park where she had lived for 36 years, they moved to Glendale. Lourens died 11 January 1991.

Nancy was active in the Upton Ward as a Primary Teacher, in the 31st Ward and Park Stake as Primary and Junior Sunday School Chorister; in the Cannon Ward and Cannon Stake as Primary pianist and Relief Society pianist. She loved Primary music and has been very grateful for the gospel that helped her raise her family. Nancy was an avid quilter and hand quilted over 225 quilts for family and friends. She served a Family History Mission in the Texas Fort Worth Mission 1992-1993. She was a member of the Daughters of the Utah Pioneers.