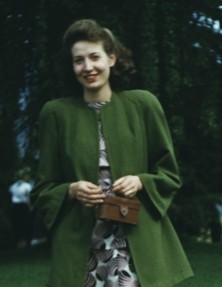 Pearl Saxton Marshall passed from this life at age 92 on June 21, 2018. She was born on February 20, 1926 in Almy, Wyoming and was the seventh of eleven children of Elijah Brigham Saxton and Clara Christina Polson. She grew up on the ranch in Almy and attended school in Evanston, Wyoming

Pearl married William Ephraim Marshall on February 21, 1947 in the Salt Lake Temple and together they raised five daughters in Evanston, Wyoming.

After Bill’s retirement, they moved to Taylorsville, Utah and from there they were called on a mission for the Church of Jesus Christ of Latter-day Saints to South Africa. After returning from her mission, she was a seamstress at the Jordan River Temple.

Bill passed away on April 12, 1982 and was quietly waiting to be reunited with her.

She spent a short time before her death at Mission Bear River, Tremonton, Utah where all there made her feel loved, and the family thanks them for their care and compassion. They would also like to thank Rudd Funeral Home for their kindness and professionalism.