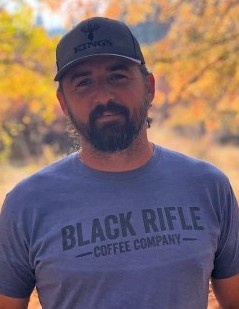 Rick Allen Haynes, a handsome, blue eyed, nature loving, family man passed away peacefully on March 5, 2022 surrounded by his loved ones. Rick was born on December 1st, 1978 and grew up in a beautiful mountain community in Northern California called Westwood, CA.

Rick faced life with the spirit of a Bison. Bison are unlike most animals, they choose to run directly into the storm and brace against its power, while always moving forward. Instinctively this amazing animal never tries to avoid hardship but instead attacks it head on. He lived life to the fullest and always would say, “Enjoy the journey, be kind, live, and LOVE life.” Rick’s fighting Bison legacy lives on through his wife, their three daughters, and one beautiful granddaughter.

Rick was a man dedicated to serving his friends and family, enjoyed Jack Daniels, and  pulling his daughter’s lures out of trees. He loved hunting with his girls and his hunting buddies, lived for side by side rides with friends, and he could never get enough of family get-togethers. Music and singing  was another pastime for Rick. On Friday nights, you could hear him telling his Alexa (speaker) what music to play while Heather would feel like the third wheel. He was also an extremely talented wood-worker and many homes in Northern California are furnished with one of his custom, tree-log bed frames. Rick left a positive impression on everyone he met, especially once he cooked for them. Hunting, fishing, and ‘catching a buzz’, he did it all. Rick loved life so much he lived double time, never letting life pass him up.

Right out of high school, Rick joined the United States Airforce from September 1997 – September 2002 where he made a long list of friends that soon became family. During that time, he also married the love of his life, Heather on December 5, 1998. After his time served, he worked at Sxor/Bc Customs in Clearfield, Utah from 2002-2019. In 2005, he moved his family to Westwood, CA and became a correctional officer at High Desert State Prison. You could say Rick loved moving around, just ask his wife, she loved it too. Finally, Rick moved one last time, landing back in Utah where he worked as a civilian at Hill Air Force Base. He served 1 year in Afghanistan as a civilian employee in the Air Force division.

He is survived by his wife Heather Haynes; three daughters; Braxtyn (Tyson), Phoenix, Karsyn and granddaughter River Rae King; of Bear River City, Utah, his parents; Jim and Patty Haynes, and his brothers; Bill, John (Melissa), Phillip (Liz), and David (DeAnna) of Tooele, Utah and many nieces and nephews.

Rick will live in our hearts forever!