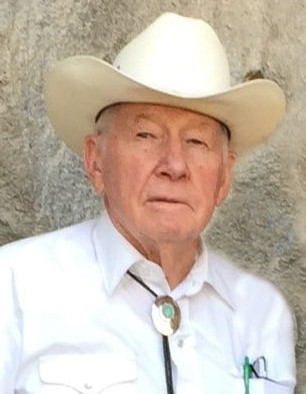 Robert Lee Allen passed away at his home, in the arms of his wife, on Wednesday, November 8th, 2017. He was born the youngest of four children on May 22, 1927 in Ogden, UT to Leo Lowe Allen and Alma Price Allen.  He lived most of his young life in Blue Creek and Tremonton where he learned the value of hard work.  In 1945, he graduated early from Bear River High School and LDS Seminary to serve his country in the Navy and then he fulfilled a two year LDS mission in Hawaii.  Lee married his high-school sweetheart, Bernice Petersen on April 20, 1949 in the Logan LDS Temple.  They are the parents of six children: Bob (Pennie) Allen, Lewie (Gen) Allen, Lani Jane (Rodger) Callister, Suzanne (Dewey) Pierson, Pauline Allen and Andy Allen. Together they created a happy life for their children, living in East Garland, Blue Creek, Collinston and Twin Bridges, MT. Lee and Bernice served two LDS missions in Oakland, CA and Hawaii.  All 3 of his missions were with the Polynesian people, whom he loved so much. After 62 years of marriage, Bernice passed away in 2011.  Lee worked as a farmer, rancher and real estate broker.  Lee’s life was a life of love and service.  He served in many church callings including Counselor in the Stake Presidency, High Counselor, Bishop and Gospel Doctrine Teacher. Currently he was serving at the Logan Temple and as a High Priest Group Instructor. He loves the Scouting Program in which he and Bernice served for many years. They were awarded with multiple honors including the Silver Beaver, but most of all, they loved helping to build strong, young men.  He also served in the Utah House of Representatives for 10 years (1983-1993) and then was appointed as a Box Elder County Commissioner by the Governor, a position that he was elected by the people for 8 more years (1993-2000).  He truly loved the people that he worked with in the county and state and valued their friendships. Lee married Marie Grover Korth in 2016 and together they have enjoyed companionship, family, traveling, love and living the golden years.  Marie cared for him as an angel until the end.  Lee is survived by his wife, Marie, 4 of his children, 19 grandchildren and 35 great grandchildren.  He is preceded in death by his parents, his wife, Bernice and sons Bob and Andy Allen. Navajo son, Sam Herrera.  One brother and 2 sisters.