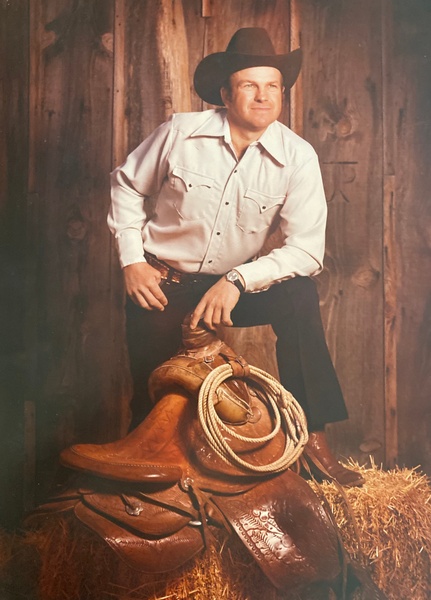 Ross Neil Rhodes passed away peacefully on his beloved farm surrounded by his family on July 19, 2022.  Neil was born on August 24, 1935 to Rossco Rhodes and NaVelle Nielsen.

Neil learned from an early age to work hard to achieve many things in life.  His greatest achievement was his longtime love, Gael Cutler.  Neil met Gael at the Crossroads where she was a waitress and he was a mechanic.  They were married on March 20, 1959 and had three sons, Reed, Ralph, and Ron.

Neil worked tirelessly on his farm and as an employee at Thiokol where he retired after 24 years of service. Horses were Neil’s greatest joy.  He was president of the Bear River Cutter Association, a member of the Box Elder County Mounted Sherriff’s Posse, and the American Quarter Horse Association.   Flat track racing was where you would find the Rhodes’ family in the summer and chariot racing in the winter; both hold many great memories in the Rhodes family.  Neil’s proudest stallion was “Tinky Joe”!  Neil was a reservist in the Utah National Guard, and also a member of the morning coffee crew at the Cross X and JC’s.

Neil was preceded in death by his wife Gael; brother, Joe Rhodes; sister, Carol Anderson; his parents Rossco & NaVelle Rhodes; a special Uncle, Reed Nielsen and many other extended family and friends.

We would like to thank all those who came to visit and helped take care of Dad.  In lieu of flowers, please take time to spend with your family.  Time goes faster than you think.