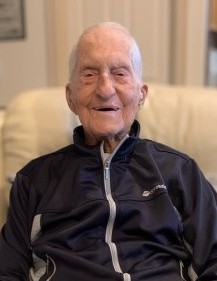 Ross Edward Martin,100, of Pembroke, Virginia passed away from this life July 7, 2021, in the loving care of his family at home in Tremonton, Utah. Born in Giles County on June 21, 1921, he was a son of the late Marcellus and Pearl Smith Martin. Ross “Curly” was a devout and active member of The Church of Jesus Christ of Latter-day Saints, New River Ward, Pembroke, where he fulfilled many callings in the church over a period of sixty years. His last calling, which is a calling for life, was that of a Patriarch of the Pembroke New River Stake. He was sealed to his wife, Gladys, in the Salt Lake City, Utah, LDS Temple in 1955.

Ross and his brother Eugene both worked at the Celanese Plant and with their Martin Brothers Construction Co. Ross also served as manager for the Pembroke Telephone Co-op for thirteen years after his retirement from the Celanese Plant. Some of his other services in the community included: manager of Castle Rock Golf Course/Recreation Area, manager of the Solid Waste Program of Giles, and as County Administrator for a short period of time. In 1944 he was nominated for Citizen of the Year in Giles County. He also served on the Board of the Industrial Development Authority of Giles County, The Plumbing and Heating Rehabilitation Program of the County, American Legion Post 311, Pembroke Ruritan Club, Giles County IDA, Advisory Board of the National Bank, and Military Honor Guard.

He is a Word War II veteran having served with the Army in Italy with the 91st Infantry of the 361st Infantry Regiment as a gunner on a 60MM mortar. He was awarded the MI Rifle Sharpshooter, Combat Infantry Badge, European African Middle Eastern Service Ribbon, Good Conduct Medal, Distinguished Unit Badge, Victory Ribbon, and three Bronze Stars.

He was preceded in death by his parents, his beloved wife, Gladys of 70 plus years of marriage; brothers Harold Martin, Eugene Martin, Alma Martin; sister Alberta M. Williams. He leaves to cherish his memory with his only child, Patricia A. Goad and son-in-law Andrew Goad of Tremonton, Utah; three wonderful grandchildren: Carrie Clark, Tasha Conrad, and Torrey Goad; nine great-grandchildren and thirteen great-great grandchildren; his beloved nieces and nephews, and a host of friends and his church family at New River Ward. His life was well lived.

Funeral services will be held in Pembroke, Virginia.