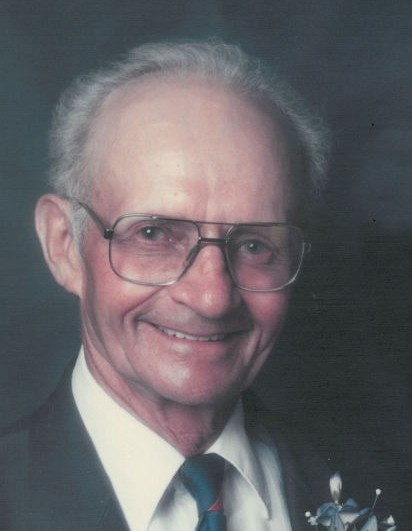 Royal Harold Morris, 98, our loving husband, father, grandfather, great grandfather, and dear friend passed away peacefully at his home in Park Valley, Utah on January 6, 2017. He was born on February 12, 1918 in Salt Lake City, Utah to Eli Ray and Tina Kunzler Morris.  He had one brother, Le Grand Morris and one sister Seletta Morris Pitcher.  He was raised in Rosette and attended school there until the school was moved to Park Valley.  He and his cousins attended high school at Box Elder High in Brigham City, Utah.

Royal served an LDS mission to the Western Central States.  Approximately a year later he enlisted in the US Navy during WWII (1944-1946) where he served as a machinist aboard the S.S. Regal in the South Pacific. After returning to Utah, he met his parents at the depot and told them he had one more place to go before returning home.  He headed to Shelley, Idaho to meet the love of his life which he had been writing to for the past 18 months, Mildred Huntsman.  They were married in the Idaho Falls Temple on July 2, 1946.  On April 2, 1947, after living on the family ranch in Rosette, their life began on the Morris Ranch east of Park Valley where he lived the rest of his life.  On July 2, 2016, they celebrated their 70th wedding anniversary.


As a member of The Church of Jesus Christ of Latter-day Saints he loved serving in his various callings. He retired from full time ranching on May 9, 2015 when he had a stroke.

In lieu of flowers, the family suggests that donations be made to Primary Children’s Hospital.