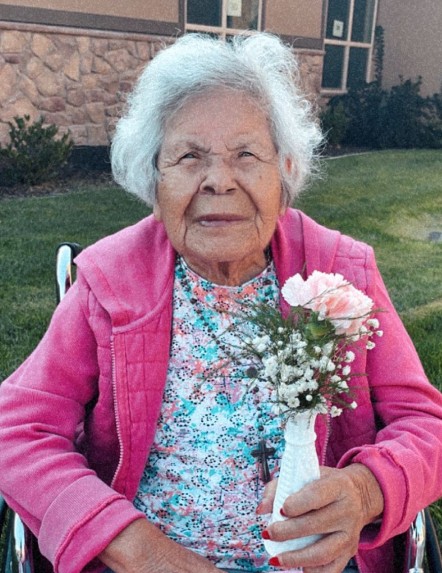 Rufina Elsie Berber Cervantez was born on March 11, 1927 in Beeler, Kansas as the fifth child to her parents, Antonio Berber and Gregoria Galvan, who are both deceased. Her siblings were Tiburcio Berber, deceased, Carmen Zambrano, her only living sister; Cleofus Cervantez, deceased, Andrea Strong, deceased,  sister, Georgina Rios, deceased, and step-sisters and step-brothers from California. She attended a one-room school in Finney County and graduated from 8th grade. In 1977, Rufina received her high school diploma from Box Elder School District.

Rufina married Augustine Cervantez in November 1953. They moved 20 miles west of Snowville, Utah in 1960 to work at Taylor Farms. They had eight children, with one daughter, Geraldine, who died as an infant. Her husband died on August 2, 1963.  She and her children moved to Snowville, Utah shortly after. Rufina was a mother and father to her seven children. She cooked great Mexican food, especially delicious flour tortillas and enchiladas, canned different fruits and vegetables, raised chickens and a garden with her children, made handmade quilts, and helped her family, neighbors, and friends.

Rufina bought a home in Tremonton, Utah in the summer of 1975.  She attended and was very active, for years, in her church, Santa Anna Catholic Church, in Tremonton, Utah. For 18 years, Rufina worked for Bear River Head Start as a teacher assistant for 3 and 4-year old children,  From 1995 to 2000, she worked for the YWCA. Her community projects included a 4H assistant, PTA Vice President for the Snowville Elementary School, Cub Scout Assistant, and a member of the Low Income Housing Committee in Tremonton, Utah.

She spent a lot of time with her children and grandchildren, especially during holidays. Christmas was spent at her home annually with family and she enjoyed coloring Easter eggs with her grandchildren and great grandchildren. Rufina loved her family, spending time outdoors and having family get together events with her sister, Cleo, and other relatives who visited from Kansas, Texas, Colorado, and California. Her hobbies included reading, cooking, and embroidery.

She resided in her home in Tremonton until 2017 when she moved to the Bear River Valley Care Center due to her blindness. In 2019, she moved to Brigham City, Utah to live at Mission at Maple Springs for two years.