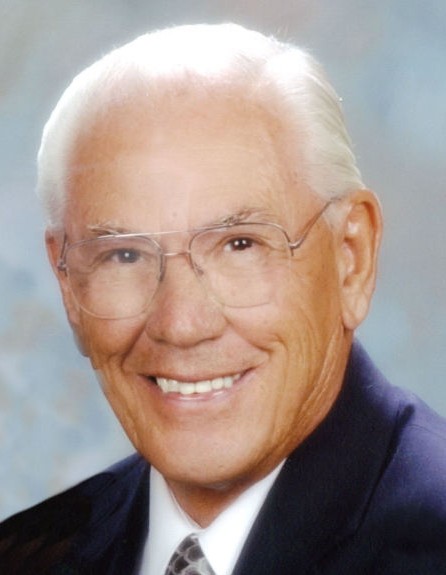 Tremonton- Sharon Archibald, 84, passed away peacefully on March 5, 2016 at home with his family by his side, just eight short days after his dear sweetheart, Marlene, passed away.

Sharon was born on March 11, 1931 in Tremonton, Utah to Vilate Haws and Parley Archibald. He was raised in Tremonton and attended Bear River High School. He married his high school sweetheart Marlene M Mason in the Idaho Falls Temple on October 19, 1949.

He was always active and involved with many business adventures. He worked for the Arco Gas Company and County Farm Service, family owned business. He later owned and operated Archibald Dodge and Archibald Ford, Dealerships of which he was the owner-operator. He was a developer of Archibald Estates where he completed seven phases of his development project. He retired from the automobile business at age 48 and then continued in farming, building homes, and built a 117 storage unit facility along with other business ventures.

Sharon was the patriarch of his family in life and church. He loved sharing the gospel with family, friends and strangers, anyone that would listen of which he converted many. He was a member of the Church of Jesus Christ of Latter-day Saints and served faithfully. He was a stake executive secretary, councilor in the bishopric, stake missionary, teacher and priesthood leader. He served a mission in Australia, New York Bronx and numerous missions at the Joseph Smith Memorial. He so enjoyed his temple calling in which he served for many years with Marlene.

He was a pilot and loved to fly. His favorite hobby was building radio controlled airplanes and loved to fly them for family and friends. He loved to fish. He loved to serve others. He was a very service oriented to his community, church, family, friends or anyone in need. He always looked forward to a challenge and learning something new.

He was preceded in death by his sweetheart and eternal companion, Marlene; his parents, his brother, Melbourne Archibald, sister Ruth Adams and brothers-in-law, Ray Newman and Rex Adams.

The family would like to offer a special thanks to Karl Wall, Levi Cox and Rocky Mountain Care for their special care of both Sharon and Marlene. Also a very special thanks to special friends, neighbors and all those who visited often.