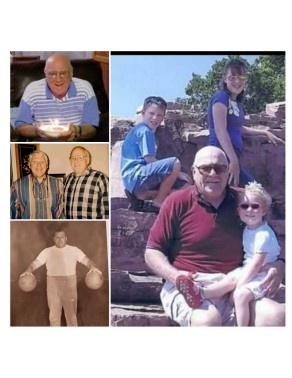 Sheldon Summers, also known as Riley, passed away on Wednesday January 20 2021 at his home in Pleasant View Utah surrounded by his family and those who loved him. He was 79 years old.

Riley was born in Tremonton Utah on September 6, 1941 to Merlin and Hazel (Johnson) Summers. He was raised on his family’s farm in Bothwell where they raised sugar beets, wheat and milked dairy cattle. He was the typical farm kid and was busy from sunup to sun down.  This work ethic served him well his entire life through school, mission, college athletics and his career as a coach and educator. Riley, graduated from Bear River High School where he lettered in track and field, wrestling and football.  He held the state of Utah shot put and discus record for 20 years until it was retired in 1979.  He attended Utah State University on a full ride scholarship for track and field and played center position for the football team for 2 seasons.

In 1961 he left college to serve a mission for the Church of Jesus Christ of Latter-Day Saints in what was then called The Great Lakes Mission.  An area covering Michigan, Ohio, Illinois, and Indiana.  He served two full years and returned home to Utah and USU where he majored in Secondary Education/Physical Education and Sociology. This is where he honed his knowledge and love of history. He also was an active member of the Sigma Chi fraternity and kept in contact with many of his fraternity brothers throughout his life.

It was in 1968 he was set up on a blind date with his sweetheart, Kathleen Timothy on New Year’s Eve and they were together from that day on for 52 years.  Each of them graduated with a Bachelor’s Degree in education and spent the next few years moving to Brigham, Vernal and eventually settling in the Ogden area and calling Weber County home.

Being a football, wrestling and track and field coach allowed Riley to teach diverse ages of young adults.  He taught at Mt. Ogden Junior High, Highland Junior High, Snowcrest Junior High, Roy High and retired from Weber High in 1998. At Roy and Weber, he taught US History, American Government, Sociology, PE and Mock Trial. Wherever he taught, he put his whole heart into what he was doing to give the kids the best experience and education they could have.  He genuinely loved his job.  It was while coaching football at Roy and Weber that they won the state football title.  Roy in 1981 and Weber in 1985.  He had many wrestlers while being the head wrestling coach at Roy win state titles.  He respected the sports and players and made sure they knew that.

After retirement, Riley and Kathy traveled in their RV and were able to see many beautiful places and made sure their dog Bandit was in the co-pilot seat.  They often traveled to the Midwest to visit their daughter Shelly and their three grandchildren, whom they adored.  They were able to live in South Dakota for a short time and spent many days with their granddaughter Grace tending her.  This was truly one of the highlights of Riley’s life. He did not grow up with grandparents, so he was learning along with his grandchildren what this new relationship was all about.  Being a grandpa was a joy to him and he did it well.

As time went on, he was grateful for the contact and relationships he had with other coaches.  His daily phone calls to and from his brother Randy in New Mexico, visits from friends and watching football were a godsend when getting out was hard.  He appreciated the time, friendship, and effort.

He is survived by his wife Kathleen Summers (Timothy), daughter Shelly Mathis (Summers) , sister Shanna Davenport (Summers), brother Randy Summers, Granddaughter Katelyn Dudley (Mathis), Grandson Sam Mathis and Granddaughter Grace Mathis. He has one great grandchild and one on the way along with several nieces and nephews.

He is preceded in death by his parents Merlin “Mike” Summers and Hazel Summers (Johnson) and niece Kathlyn Jepson (King).