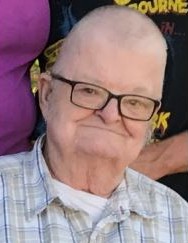 Palmer, Alaska-Sidney Alma Biddle went home to his wife on October 16, 2021, after being separated by death for 16 years. We’re sure he said, “Spectacles, Testicles, Wallet, and Watch” before he left to make sure he was ready. He was born at home on March 26, 1936. He was the 5th and last child of Melva and Clarence Biddle. He was raised in Collinston, Utah. After graduation from Bear River High, he enlisted into the US Navy. He was deployed to Korea. He was stationed on the USS Intrepid aircraft carrier where he operated the elevators that brought the planes up from the lower deck. He only served for 3 years, 10 months, and 2 days because the Korean Conflict ended.
Shortly after being honorably discharged, he went to work for Thiokol in their tool crib, retiring in 1998. He met Camilla Roskelley while dragging main in Logan. On November 2, 1959, they were married. After they said, “I do”, the cuckoo clock in the courthouse cuckooed 5:00 p.m. He said that might be a sign for their marriage. Their marriage was solemnized in The Church of Jesus Christ of Latter-day Saints Logan Utah Temple a year later.
He enjoyed making things out of wood, fishing with his family and friends, and just sitting around talking with those he loved. He also liked playing pinochle and cribbage with whoever would come and play with him. During the 70’s and 80’s, he was involved in several CB radio clubs. He was known as “Knucklehead.” Through listening to the CB Radio, he was willing to help whenever someone called and needed help or a meal. He was an all-around good guy.
As he grew older, he would say, “I’m not a dirty old man, I’m just a soiled senior citizen.” He loved teasing the nurses when they came to visit.
Those who greeted him in heaven were his parents, siblings, wife Camilla, infant son Stephen Noel Biddle, daughter Saundra Biddle and many dogs. Those who are left behind to tell his jokes and stories are: his children, Greg (Cathy) Biddle, Lewiston, Utah, Christine (Steven) Neeley, Palmer, Alaska, and Deanna (Lawrence) Gardner of Corinne; his three grandsons: Bryan Neeley, Palmer, Alaska, Ian David Neeley (Candace), Garland, Utah, and Mikal (Nadja) Neeley of Clarksville, Tennessee; and his adored great-grandsons, Kaedyn Empey and Finn Neeley. He is also remembered by 4 step-grandchildren, 17 great-step-grandchildren and 3 great-great- step-grandchildren. Misty, his pug, misses him.
His celebration of life will be held November 27th, 2021, at the Garland Tabernacle in Garland, Utah (140 West Factory Street, Garland, UT) at 11:00 a.m. There will be a remembrance gathering from 9:30 a.m. to 10:45 a.m. In lieu of flowers, please take your loved ones out to dinner. His favorite places were JC’s Diner, Denny’s, and Angie’s Café.
We would like to thank the VA nursing staff, and ANCORA home health services for their excellent care of dad while he was living with his daughter in Palmer, Alaska. A special thanks to Teresa Freitag and Leslie Nicholson for their compassionate service while taking care of him.
Thank you to the Garland 1st Ward Relief Society for help with the funeral and the luncheon.