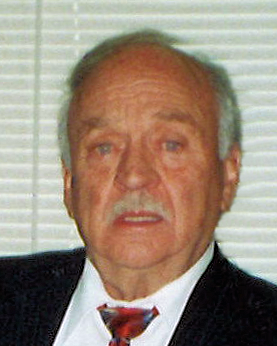 Ted was born on December 19, 1929 in Park City, Utah to Dewey Algeroy Ramsdell and Florence Gertrude Anderson. He had seven siblings Jack, Beverly (Sally), Dee, Richard, Kathleen, Karen and Michael. Ted attended schools in Box Elder and enjoyed playing football. After graduation, Ted enlisted in the U.S. Army. After his honorable discharge he re-enlisted when the Korean War broke.

Ted met his best friend and love of his life Marlene Jensen. They were married on November 28, 1953 in Garland, Utah. They were later sealed for time and all eternity in the Idaho Falls Temple. Ted and Marlene are the proud parents of five boys, Derk Ted, Baby Boy, Gregory L., Nicholas A. and Mathew Regan.

After serving his country, Ted attended Utah State Agricultural College. He played varsity center for the Aggies football team for 4 years. He graduated with a bachelor’s degree in Physical Education. He took his first job in St. Anthony, Idaho as the head football coach. Later he finished his Master’s degree in Education Administration from BYU.

In 1960, Ted moved his family to Blackfoot, Idaho where he worked as an administrator for the Blackfoot School District until his retirement. Ted was a strong believer of education and was proud to have been a part of countless students educations.

After his retirement, Ted and Marlene moved to SLC, Utah where Ted built their dream home in Holladay, Utah, where he lived until his passing.

Ted was a member of The Church of Jesus Christ of Latter-day Saints. Ted and Marlene served as Missionary hosts at the Joseph Smith Building in SLC, Utah for 16 years. Among his many church callings, he especially enjoyed working with the youth.

Ted was a true friend to everyone he met and was always willing to help anyone in need. Even if it meant that he went without.

Ted is survived by his wife of 69 years, Marlene, sons, Gregory (Annie), and Mathew (Tracy) both of Blackfoot, Idaho. Grandchildren, Kate, Hadley, Hailey (Lukas) and Gunnar and five great grandchildren. Brother, Michael and sister, Karen and all the friends he met along the way.

He is preceded in death by his sons, Derk, Baby Boy and Nicholas. The family would like to express their sincere appreciation to the Holladay Healthcare Center that cared for Ted in the past few weeks.

In lieu of flowers the family requests donations be made to Ted L. Ramsdell donation account for scholarship c/o Zions Bank. The donation can be made at any Zions Bank. To mail a check, please send to Zions Bank 1350 Parkway DR. #1 Blackfoot, ID 83221.