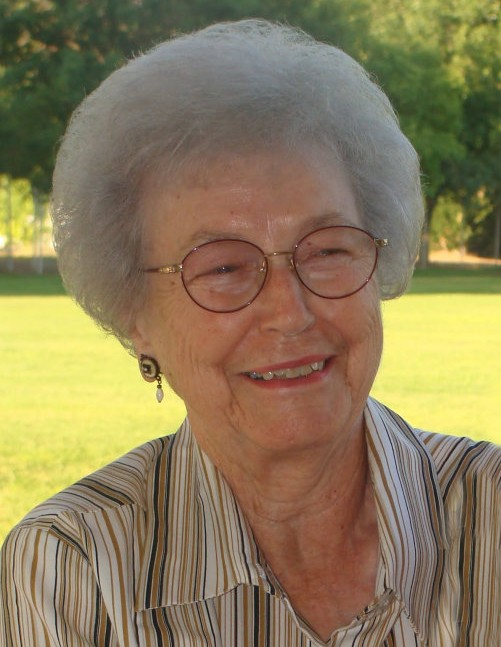 Bear River City- Thora Bowman Anderson passed away surrounded by her family on July 28, 2021, at Our House Assisted Living. She was born on January 11, 1926, in Thatcher, Arizona  as the first of seven children to Rulon Hans & Rita Damron Bowman. She enjoyed sharing her birthday with her mother. In May of 1926, their family moved to Honeyville, Utah where she grew up.

She married Blaine N. Anderson on June 25, 1946, in the Salt Lake City Temple. After Blaine returned from the service and they were married, they established their home and family in Bear River City. There Blaine started to farm with his brother, Dwight, and their sons. They have lived in Bear River City ever since. Thora was the last of the Anderson siblings and spouses to leave this world.

Thora & Blaine were blessed with three children: Linda & Newell Norman of Corinne, Brian & Cona Anderson of Elwood, and Scott & Nikki Anderson of Fielding. Thora enjoyed the time she spent with her family. She took care of Blaine until he passed in 2008. After he passed, she was fortunate to have daily visits from her sons.

She enjoyed traveling and playing cards with her friends. She also enjoyed eating out with them and her family. One of her other hobbies was growing a garden, and beautifying her yard. She would spend several hours canning the produce from her garden. Thora was an excellent cook. She always had holiday dinners at home. She loved to have all her family there. Her family especially loved her homemade rolls, banana cream pie, stuffing, and hand dipped chocolate candy.  Holiday dinners were also a special time for her granddaughters. They were able to try on the new dresses that Thora had made. She also enjoyed taking her children and later her grandchildren and great grandchildren to the Bear River Easter and Christmas dances. At these dances, she always taught the kids how to dance.

Along with her ability to garden and cook, she was an accomplished seamstress. She sewed many prom dresses, wedding dresses, and bridesmaids’ dresses. She used this talent to sew for people across the country, and even sent some of her work to Australia.

Thora is a member of The Church of Jesus Christ of latter-day Saints and served in several church callings throughout the years. Some of her favorites were being the quilt director and contributing to the many ward bazars and July 24th celebrations. She donated a quilt and other handiwork for the July 24th auction.

She was preceded in death by her parents, husband, two brothers: Lawrence & Clinton, and two sisters: Erma Colby & Cleo Barfuss.

The family would like to extend a special thanks to Leslie Gibbs. Fridays were always the day she went to get her hair done and do her grocery shopping. She always had a pepsi, chocolate candy, and two apple fritters. They also want to extend thanks to Cindy Denkers for bringing in quilts for her to bind, and to the staff at Our House Assisted Living. Special thanks to granddaughter Cindy & Alan Saunders family for taking care of grandma and being great neighbors.