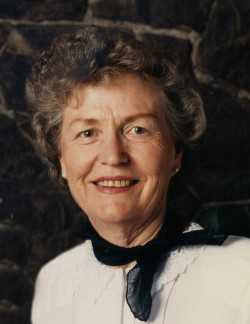 She was the youngest in her family, with four brothers, Fenly Jr (Beatrice) Merrell, Clifford (Marie) Merrell, Orin “OJ” (Arwella) Merrell, Meriner (Flora) Merrell and one sister, Maurine Merrell (Antone Thygerson), and was preceded in death by all. Verla met her eternal sweetheart, Floyd Wendell Johnson, after college while working on the Deming, New Mexico Air Force Base where he was stationed. She was a talented singer and director of plays in college and was asked by their LDS ward leaders to put together a group to sing at church on Thanksgiving. Floyd had caught her eye, and she invited him to join the quartet. That was the beginning of their beautiful relationship. They were married on Feb. 11, 1945.

Mom was a great leader in a variety of church and community positions and our favorite was when she helped write and direct many winning roadshows as we were growing up. Mom worked as a real estate agent, a book keeper, and the secretary in the Utah Dental Association, Salt Lake City office. She and Dad moved to Tremonton, Utah in about 1979 where they both worked at Morton Thiokol until they retired. They also served many years in the Logan, Utah LDS Temple, as well as 18 months in the Missouri, St. Louis Mission.

Online condolences may be shared with the family at www.ruddfuneralhome.com